Some laggards that still have some Windows Server 2012 virtual machines running got a bit of a nasty surprise last weekend. A number of them went into a boot loop. Apparently the November 2019 updates caused Windows Server 2012 reboot loop. Well, we have dealt with update issues before like here in Quick Fix Publish : VM won’t boot after October 2017 Updates for Windows Server 2016 and Windows 10 (KB4041691). No need to panic.

So what caused this Windows Server 2012 reboot loop?

We turned of the virtual machines on which the November 2019 updates caused Windows Server 2012 reboot loop. We started them up again in “Safe mode” which completed successfully. Finally, we then did a normal reboot and that completed as well. All updates had been applied bar one. That was the 2019-11 Servicing Stack Update for Windows Server 2012 (KB4523208).

We manually installed it via Windows update and that succeeded.

When reading the information about this update https://www.catalog.update.microsoft.com/ScopedViewInline.aspx?updateid=5fa2a68f-e7cd-43c7-a48a-5e080472cb77 its states it need to be installed exclusively.

Maybe that was the root cause. It got deployed via WSUS with the other updates for November 2019.

Anyway, all is well now. I remind you that we have at least 2 ways of restoring those virtual machines. In case we had not been able to fix them. Have known good backups and a way to restore them people.

We fixed the issue and patched those servers completely. So all is well now. Except for the fact that they now , once more, have been urged to get of this operating system asap. You don’t go more than N-2 behind. It incurs operational overhead and risks. They did not test updates against this old server VM and got bitten. Technology debt without a plan is never worth it.

Nothing like coming back from a holiday to find out the quality assurance of Windows updates has cause some issues once again. What saved the day here is a great colleague who identified the problem, declined the update in WSUS and removed it from the affected machines. Meanwhile, Microsoft Pulled KB4036479 for Windows Server 2012 R2.

KB4036479 was to eliminated the restart that occurs during initial machine configuration (IMC) with with Windows Server 2012 R2. But after a the “successful” update it does the post install reboot, rolls it back and that process starts all over. This happened to both Windows Server 2012 R2 VMs on premises as well as in Azure IAAS. For now it has been pulled form the Microsoft Update Catalog (https://www.catalog.update.microsoft.com/Search.aspx?q=KB4036479). The issues has been discussed on the forums here.

Again, it pays to deploy and test Windows update to a lab or proving grounds environment that mimics your environment before you let it lose on your production environment. Be practical here and don’t let the desire for a perfect but non existent lab be the enemy of good, existing and usable one!

PS: Some people reported issues with KB4038774 as well, but that does not turn out to be the case. In any way these preview updates have no business being installed on production servers and I wish Microsoft would put them in a separate category so they are not detected / downloaded / approved with other production updates but allow for ease deployment /use in proving ground environments.

Microsoft recently released another update rollup (aka cumulative update). The

This rollup includes improvements and fixes but more importantly it also contains ‘improvements’ from June 2016 update rollup KB3161606 and May 2016 update rollup KB3156418. When it comes to the June rollup KB3161606 it’s fixes the bugs that cause concerns with Hyper-V Integration Components (IC) to even serious down time to Scale Out File Server (SOFS) users. My fellow MVP Aidan Finn discuses this in this blog post. Let’s say it caused a wrinkle in the community.

In short with KB3161606 the Integration Components needed an upgrade (to 6.3.9600.18339) but due to a mix up with the manifest files this failed. You could leave them in pace but It’s messy. To make matters worse this cumulative update also messed up SOFS deployments which could only be dealt with by removing it.

Bring in update rollup 3172614. This will install on hosts and guest whether they have  already installed or not and it fixes these issues. I have now deployed it on our infrastructure and the IC’s updated successfully to 6.3.9600.18398. The issues with SOFS are also resolved with this update. We have not seen any issues so far. 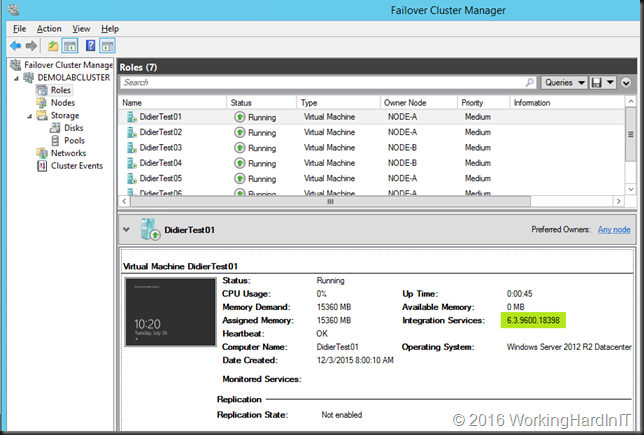 In short, CU should be gone from Windows Update and WSUS. It it was already installed you don’t need to remove it. CU will install on those servers (hosts and guests) and this time is does things right.

I hope this leads to better QA in Redmond as it really is causing a lot of people grief at the moment. It also feed conspiracy nuts theories that MSFT is sabotaging on-premises to promote Azure usage even more. Let’s not feed the trolls shall we?

Just a quick post to make sure you all know there’s an important security update for Hyper-V in the April 2016 batch of updates.

Please review Microsoft Knowledge Base Article 3143118  and Microsoft Security Bulletin MS16-045 – Important for details. Realize thatthis ios one you’d better test en deploy asap. In my deployments I have not seen or heard o any issues with the update so far.

Why this little shout out? Well it’s a remote code execution vulnerability that can leverage the guest to run code on the host.

This security update resolves vulnerabilities in Microsoft Windows. The most severe of the vulnerabilities could allow remote code execution if an authenticated attacker on a guest operating system runs a specially crafted application that causes the Hyper-V host operating system to execute arbitrary code. Customers who have not enabled the Hyper-V role are not affected.