Some one asked on my blog if the DELL VRTX supported Storage Spaces. It’s 2018 and when I wrote about the VRTX it was mainly as a Cluster in a Box (CiB) solution. This is based on a shared SAS raid controller. The addition of a second controller improved the redundancy (past the write-through requirement as we had in 2014) even though I would really like to see a native in bow redundant network solution here as well. Whether this is suitable for your need is something only you can determine.

Bus as far as a support for Microsoft Shared Storage Spaces or Storage Spaces goes that isn’t there and I would advise against it. A storage controller configuration (pass-through) for the DELL Technologies VRTX series that supported any form of Storage Spaces never came. While with 2 Nodes and the VRTX supporting two storage controller this would theoretically be possible. But with 3 or 4 nodes (The VRXT supports up to 4 nodes) that’s another challenge.

While I have liked the idea and suggested it even as a possible path it has never materialized. If S2D, especially in combination with ReFSv3 or beyond, becomes so immensely popular, they might consider it, but for now it’s not something I see happen and they might very choose other offerings to serve that demand anyway, one with a better design for the separate pass-through capable storage controllers.

As a cluster in a box solution the VRTX does hold merit. As said, I’d love to see a few improvements made to make it fully redundant all in box. With a ruggedized version for industrial or highly mobile environments could make an unbeatable offering.

In this Episode Carsten and I look at a single host deployment with Storage Spaces on Windows Server 2016. We create a “Hybrid” disk just like in Storage Spaces Direct by combining SSD & HDD in a storage Tier. We were very happy to discover that ReFSv3.1 does real time tiering. 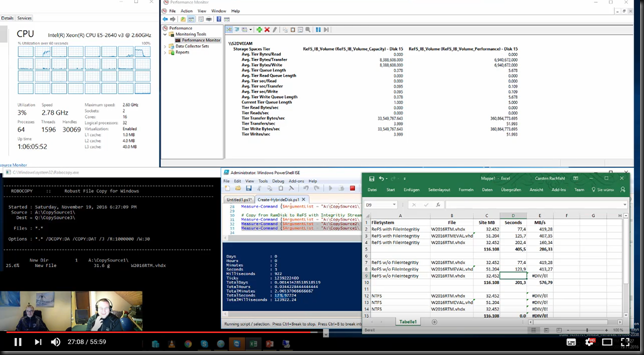 We’re very excited about this because we want to leverage the benefits if Veeam Backup & Replication 9.5 brings by leveraging ReFSv3.1 (Block Cloning) in regards to backup transformation actions and Grandfather-Father-Son (GFS) spaces savings. To do so we’re looking at our options to get these benefits and capabilities leveraging affordable yet performant storage for our backup targets. S2D is one such option but might be cost prohibitive or overkill in certain environments.

ReFS v3.1 on non-clustered Windows Server 2016 hosts bring us integrity streaming, file corruption repair with instant recovery as protection against bit rot, the performance of tiered storage and SMB3 as a backup target at a great price point.

We encourage you to watch the video and see for yourself. As always, we had fun and hope your can learn something together with us, the Hyper-V Amigos

Dell was the 1st OEM to actively support and deliver Microsoft Storage Spaces solutions to its customers. 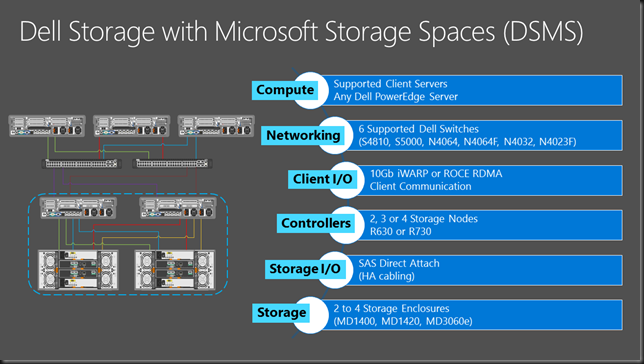 They recognized the changing landscape of storage and saw that this was one of the option customers are interested in. When DELL adds their logistical prowess and support infrastructure into the equation it helps deliver Storage Spaces to more customers. It removes barriers.

In June 2015 DELL launched their newest offering based on generation 13 hardware. 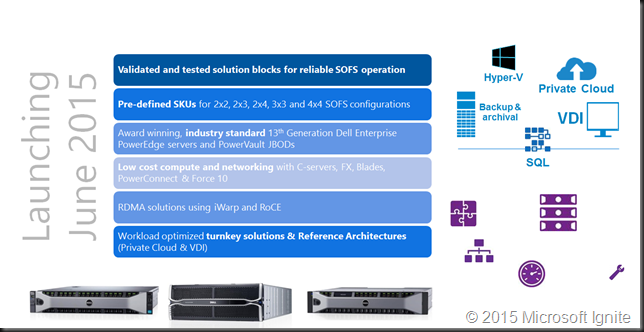 You can find some more information on DELL storage spaces here and here.

I’m looking forward to what they’ll offer in 2016 in regards to Storage Spaces Direct (S2D) and networking (10/25/40/50/100Gbps). I’m expecting that to be a results of some years experience combined with the most recent networking stack and storage components. 12gbps SAS controller, NVMe options in Storage Spaces Direct. Dell has the economies of scale & knowledge to be one of the best an major players in this area. Let’s hope they leverage this to all our advantage. They could (and should) be the first to market with the most recent & most modern hardware to make these solutions shine when Windows Server 2016 RTM somewhere next year.

Everybody is very busy and I’m a bit tires but here’s the 6th episode of the Hyper-V Amigos show cast. In this episode we get to play a bit with storage spaces in Carsten’s lab.

As always we had a lot of fun doing so and thanks to Carsten Rachfahl and the assistance of Kerstin (his charming wife, also an MVP, in Office 365) we could simulate hardware failures & film them for you!

Carsten & I discuss several scenarios and what’s happening during failovers. Carsten is assisting customers with this a lot so he has some of the most varied experience with storage spaces and SOFS out there!  Interesting stuff and for people who haven’t even looked at Windows Server 2012 or later yet a wake up call to start as the world is not limited to what we once knew. It’s not your daddy’s Windows anymore

I hope you enjoy it and we’re already planning for the next one!