Here’s the deal. While Windows NLB on Hyper-V guests might seem to work OK you can run into issues. Our biggest challenge was to keep the WNLB cluster functional when all or multiple node of the cluster are live migrated simultaneously. The live migration goes blazingly fast via SMB over RDMA nut afterwards we have a node or nodes in an problematic state and clients being send to them are having connectivity issues.

After live migrating multiple or all nodes of the Windows NLB cluster simultaneously the cluster ends up in this state:

A misconfigured interface. If you click on the error for details you’ll see 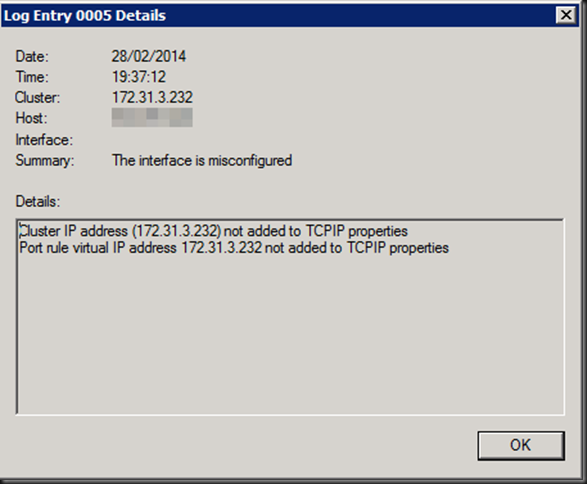 Not good, and no we did not add those IP addresses manually or so, we let the WNLB cluster handle that as it’s supposed to do. We saw this with both fixed MAC addresses (old school WNLB configuration of early Hyper-V deployments) and with dynamic MAC addresses. On all the nodes MAC spoofing is enabled on the appropriate vNICs.

The temporary fix is rather easy. However it’s a manual intervention and as such not a good solution. Open up the properties of the offending node or nodes (for every NLB cluster that running on that node, you might have multiple). 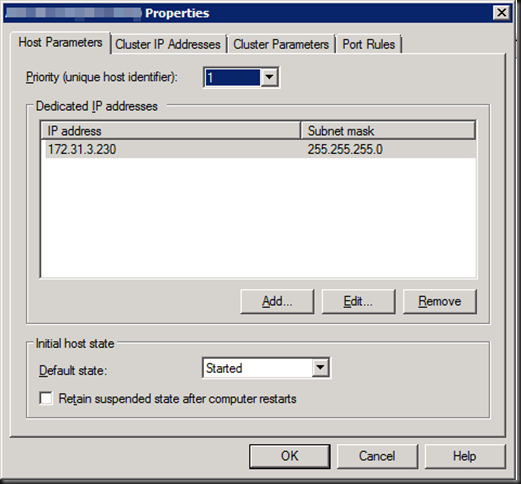 … and you’re back in business.

Scripting this out somehow with nlb.exe or PowerShell after a guest gets live migrated is not the way to go either.

But that’s not all. In some case you’ll get an extra error you can ignore if it’s not due to a real duplicate IP address on your network:

We tried rebooting the guest, dumping and recreating the WNLB cluster configuration from scratch. Clearing the switches ARP tables. Nothing gave us a solid result.

No you might say, Who live migrates multiple WNLB nodes at the same time? Well any two node Hyper-V cluster that uses Cluster Aware Updating get’s into this situation and possibly bigger clusters as well when anti affinity is not configured or chose to keep guest on line over enforcing said anti affinity, during a drain for an intervention on a cluster perhaps etc. It happens. Now whether you’ll hit this issue depends on how you configure and use your switches and what configuration of LBFO you use for the vSwitches in Hyper-V.

How do we fix this?

First we need some back ground and there is way to much for one blog actually. So many permutations of vendors, switches, configurations, firmware & drivers …

This is the default and Thomas Shinder has an aging but  great blog post on how it works and what the challenges are here. Read it. It you least good option and if you can you shouldn’t use it. With Hyper-V we and the inner workings and challenges of a vSwitch to the mix. Basically in virtualization Unicast is the least good option. Only use it if your network team won’t do it and you can’t get to the switch yourself. Or when the switch doesn’t support mapping a unicast IP to a multicast MAC address. Some tips if you want to use it:

I know, don’t shout at me, teaming on the same switch, but it does happen. At least it protects against NIC issues which are more common than switch or switch port failures.

Again, read Thomas Shinder his great blog post on how it works and what the challenges are here.

It’s an OK option but I’ll only use it if I have a switch where I can’t do IGMP and even then I do hope I can do two things:

The big rotten thing here is that this is great when you’re dealing with physical servers. They don’t tend to jump form switch port to switch port and switch to switch on the fly like a virtual machine live migrating. You just can’t hardcode all the vSwitch ports into the physical switches, one they move and depending on the teaming choice there are multiple ports, switches etc …it’s not allowed and not possible. So when using multicast in a Hyper-V environment stick to 1). But here’s an interesting fact. Many switches that don’t support 1) do support 2). Fun fact is that most commodity switches do seems to support IGMP … and that’s your best choice anyway! Some high end switches don’t support WNLB well but in that category a hardware load balancer shouldn’t be an issue. But let’s move on to my preferred option.

The Linux Integration Services (LIS) package downloaded from Microsoft  is meant to deliver support older Linux distros. In the most recent Linux distros the KVP component is to be included, as are the other Hyper-V related drivers. In these distros these drivers and components are to be part of the upstream Linux kernel, and as such are included in Linux distros releases. So you should not need this download if you run these newer distros that has the LIS built-in. The list of supported distros is slowly growing.

If you are running (or need to run) older versions of Linux in your VMs and leverage the 100% fully featured Hyper-v Server 2012 R2 that is also 100% free of charge this is your way to leverage all those features. The aim is that you’re never a left behind when running Hyper-V (within the limits of supportability, DOS 6.0, NT 4.0 or Windows 2000 is not an acceptable OS today).

To make full use of all benefits that Hyper-V provides, it is best to use Hyper-V-
specific devices for Linux. The collection of drivers that are required to run Hyper-V-specific devices is known as Linux Integration Services (LIS).

Last month Carsten (MVP – Virtual Machine) & Kerstin Rachfahl (MVP – Office 365) visited me in my home town. Apart from a short visit to the historic center & a sushi diner amongst friends we also did an interview where we discussed our ongoing Windows Server 2012 Hyper-V activities. We’re trying to leverage as much of the product we can to get the best TCO & ROI and as early adopters we’ve been reaping the benefits form the day the RTM bits were available to us. So far that has been delivering great results. Funny to hear me mention the Fast Track designs as a week later we saw version 3 of those at MMS2013. The most interesting to me about those was the fact that the small & medium sizes focus on Cluster in a Box and Storage Spaces!

While we were having fun talking about the above we also enjoyed some of the most beautiful landmarks of the City of Ghent as a back drop for the interview. It was filmed in a meeting room at AGIV, to whom I provide Infrastructure services with a great team of colleagues. Just click the picture to view the video. 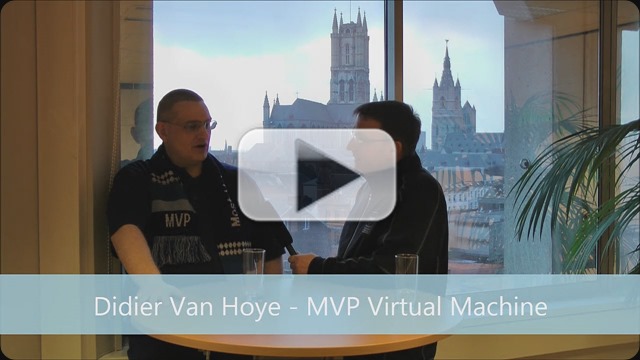 You can also enjoy the video on Carsten’s blog http://www.hyper-v-server.de/videos/interview-mit-didier-van-hoye-ber-seinen-storage-netwerk-und-mehr/ All I need to do now is to arrange for Carsten to physically touch the Compellent storage I think.

When it comes to gaining insight and understanding of your virtual environment vKernel has some nifty products. They just added two new utilities, Storage Explorer and Change Explorer, to their free vOPS™ Server Explorer that give you more management capabilities with SCOM/SCVMM or vCenter. Sure it’s to get you looking into and considering buying the paid stuff with more functionality and remediation but it does provide you with tools to rapidly asses your virtualization environment for free as is. So what did they add?

So if you need some free tools to help you get a quick insight into your environment or the need to be informed about changes of performance issues you can try these out. The press release is here http://www.vkernel.com/press-kits/vops-server-explorer-6-3. We have smaller environment at work next to our main production infrastructure where we’d like to test this out. So they need to add support for SCVMM 2012 SP1 a.s.a.p. I think

In a world were complexity reduction is paramount and the TCO/ROI needs to be good from day one competition is heating up between 3rd party vendors active in this arena providing tools to make that happen. This is especially true when they are adding more and more Hyper-V support. It also doesn’t hurt to push Microsoft or VMware to make their solutions better.