The Hyper-V amigos, @Hypervserver and working@workinghardinithardinit recently did a webinar together about Windows Server 2019 SMB Direct Best Practices. We also discuss some trends and put some things into perspective. Rachfahl IT Solutions does more of these cool webinars for you to check out (see the info at the end of the video). You can watch the webinar below on Vimeo. It’s quite an honor to be invited to talk on this subject as Carsten is one the worlds most experienced S2D practitioners.

I hope this get’s you started and updated. Need to know more? Want more details, advice and a deeper and more elaborate discussion. I will be talking about this on various occasions this year. One of them is the Cloud & Datacenter Conference Germany 2019 in Hanau. Register to secure your spot. It is a great conference with a lot of hands on, real life knowledge being shard. I will be around for the Hyper-V pre day and during the entire conference. This means you can find me to talk shop. Be warned, I can go one about the subject or a while

While a demo with a vSwitch on a single NIC as we did in part I is nice it’s unlikely you’ll use this often if at all in the real world? Here we require redundancy and that means NIC teaming. To do so we normally use a vSwitch created on a native Windows NIC team. But a native NIC teaming does not expose RDMA capabilities. And as such a vSwitch created against a Windows native NIC team cannot leverage RDMA either. Which was the one of the reasons why a fully converged scenario in Windows Server 2012 R2 was too limited for many scenarios. Loss of RSS on the vNIC exposes to the management OS was another. The solution to this in Windows Server 2016 Hyper-V comes with Switch Embedded Teaming (SET). Now using SET in each and every situation might not be a good idea. It depends. But we do need to know how to configure it. So let’s dive in.

Switch Embedded Teaming (SET in Windows Server 2016 allows multiple identical (make, model, firmware, drivers to be supported) NICs to be used or “teamed” within the vSwitch itself. The important thing to note here this does not use windows NIC teaming or LBFO (Load Balancing and Fail Over).

SET is the future and is needed or use with the Network Controller and Software Defined Networking in Windows. SET can also be used without these technologies. While today it supports a good deal of the capabilities of native Windows NIC teaming it also lacks some of them. In general SET is meant for full or partial converged scenarios with 10GBps or better NICs, not 1Gbps networking in a (hyper)converged Hyper-V scenario.

Please see New Windows Server 2016 NIC and Switch Embedded Teaming User Guide for Download for more information as there is just too much to tell about it.

We start out with a 2-node cluster where each node has 2 RDMA NICs (Mellanox ConnectX-3) with RDMA enabled and DCB configured. Live migration of VMs between those nodes works over SMB Direct works. All NIC are on the same subnet 172.16.0.0/16 (thanks to Window Server 2016 Same Subnet Multichannel) and are on VLAN 110. In Failover Cluster Manager (FCM) that looks like below. 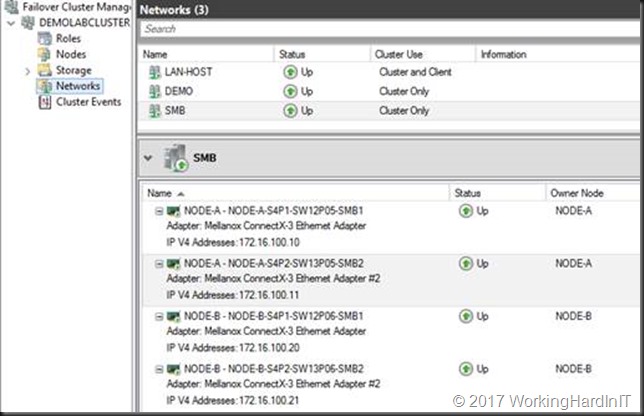 We’ll now use the rNICs to create a Switch Embedded Team.

Note that the teaming mode is switch independent, the only option supported with SET in Window Server 2016.

This will be used to manage the host and to make its purpose clear we’ll rename it.

We’ll create 2 separate management OS vNICs for the RDMA traffic later. For now, we want the HOST-MGNT vNIC to have connectivity to the LAN and for that we need to tag it with VLAN 10.

The vNIC actually “inherited” the IP configuration of one of our physical NICs and we need to change that to either DHCP or a correct LAN IP address and settings. 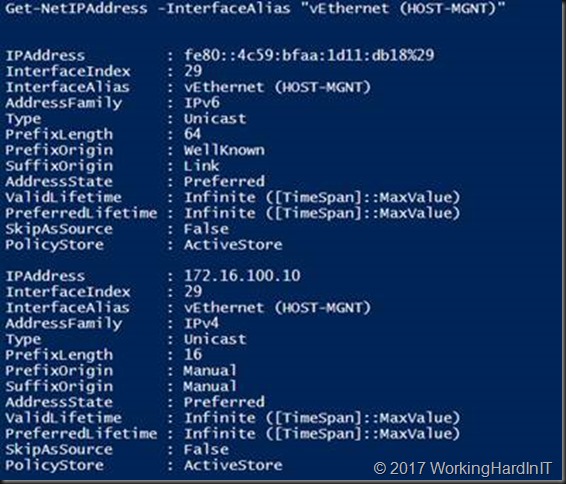 To finalize the HOST-MGNT vNIC configuration we enable priority tagging on it. If we don’t we won’t see any traffic other than SMB Direct tagged at all!

From here on we’ll focus on the RDMA capable vNICs well create and use for SMB traffic.

We create 2 vNIC on the management OS for SMB Direct traffic.

Now these vNIC need an IP address, this can be in the same subnet because we have Windows Server 2016 SMB multichannel.

We than also need to put the vNICs in the correct VLAN. Remember that DCB / PFC priority tagging needs tagged VLAN so carry that priority. Right now, we can see that these are untagged.

Normally all traffic that is originated from vNICs gets any QOS values set to zero. There is one exception to this and that’s SMB Direct traffic. SMB Direct traffic gets tagged with its QoS priority and that is not reset to 0 as it bypasses the vSwitch completely. But if we set other priorities on other types of traffic for DCB PFC and or ETS that passes over these vNICs we must enable priority tagging on these NICs as well or they’ll be stripped away.

The association of the vNIC to pNICs is random. This also changes during creation and destruction (disabling NICs, restarting the OS). We can map a vNCI to a particular pNIC. This prevents suboptimal use of the available pNICs and provides for a well know predictable path of the traffic. We do this with the below PowerShell commands.

Finally, last but not least, we should enable RDMA on our two vNICs or SMB Direct will not kick in at all.

Right now, we have it all configured correctly on one node of our 2-node cluster. The SMB network look like this now: 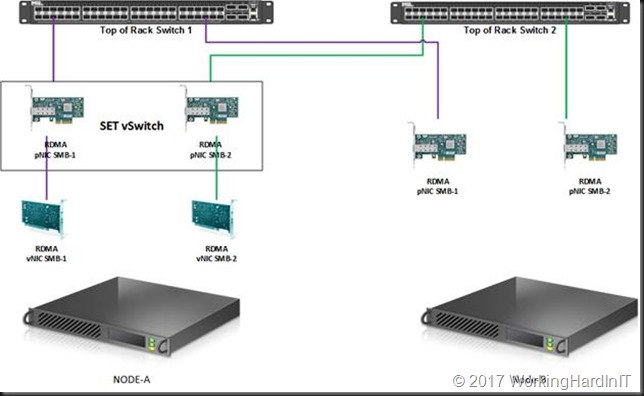 We can live migrate VMs over SMB Direct in this mixed scenario where one node has pNICs RDMA NICs, 1 node has SET with vNICs for RMDA. 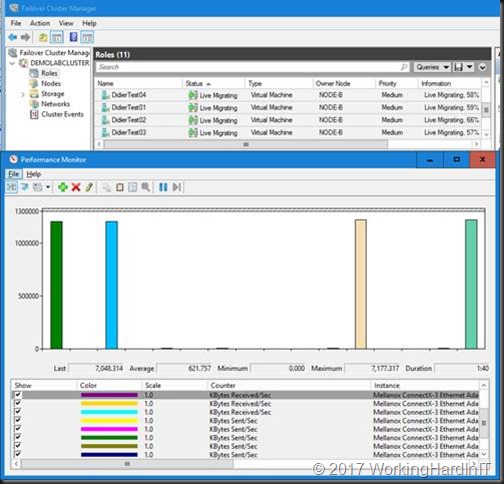 When looking at this in report mode we clearly see Node-A send SMB Direct traffic (tagged with priority 4, green) over its RDMA enabled SET vNICs to Node-B which still has a complete physical rNIC set up (blue).

As you can see in the screen shots above we now have RDMA / SMB Direct working with SET / RDMA vNICs on one node (Node-A) and pure physical RDMA NICs on the other (Node-B). This gives us bandwidth aggregation and redundancy. To complete the exercise, we configure SET on the other node as well. But it’s clear SET and RDAM will also work in a mixed environment.

We’ll discuss some details about certain aspects of the vNIC configuration in future articles. Things like the why and how of Set-VMNetworkAdapterTeamMapping and the use of -IeeePriorityTag. But for now, this is it. Go try it out! It’s the basis for anything you’ll do with SDNv2 in W2K16 and beyond. 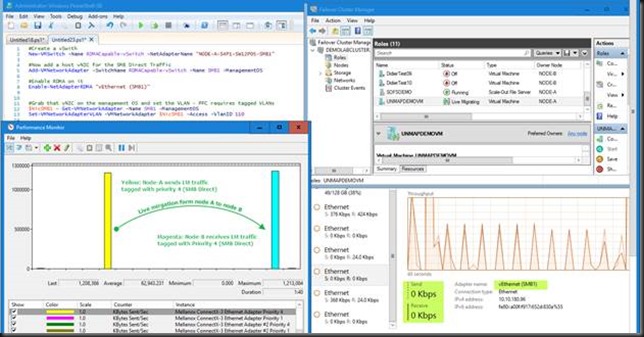 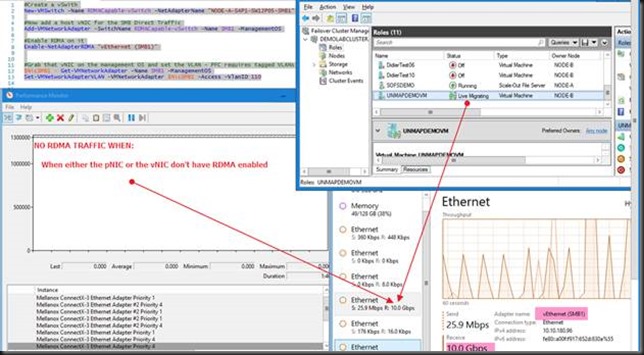 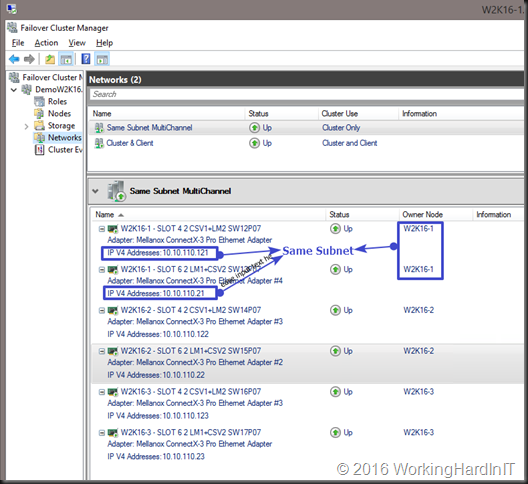 Why was this introduced?

The growth in the capabilities of the hardware ( Compute, memory, storage & networking) meant that failover clustering had to leverage this capability more easily and for more use cases than before. Talking about SMB, that now also is used for not “only” CSV and live migration but also for Storage Spaces Direct and Storage Replica.

See it in action! 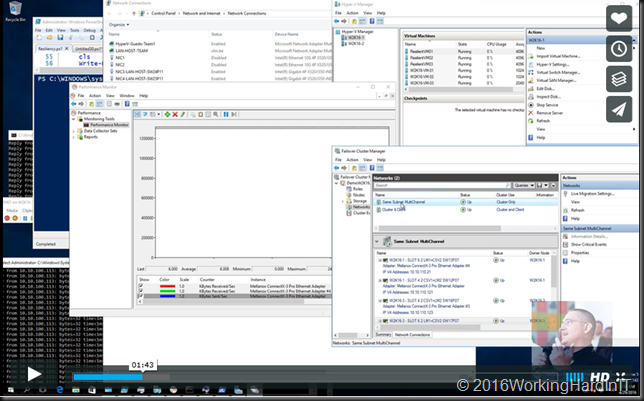 In this video I demo 2 features. One is new and that is virtual machine compute resiliency. The other is an improved feature, simplified SMB multichannel and multi NIC cluster networks. The Multichannel demo is the first part of the video. Yes, it’s with RDMA RoCEv2, you know I just have to do SMB Direct when I can!

You can read more about simplified SMB multichannel and multi-NIC cluster networks on TechNet in here. Happy Reading!