I could write a blog post that repeats the things I said bout XP here for Windows 2003 with even some more drama attached so I won’t. There’s plenty about that on the internet and you can always read these blogs again:

I also refer you to a old tweet of mine that got picked up by some one and he kind of agreed: 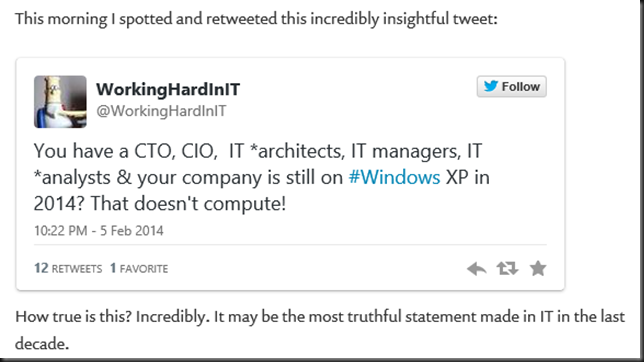 Replace “XP” with “Server 2003” and voila. Instant insight into the situation. You are blocking yourself from moving ahead and it getting worse by the day. All IT systems & solutions rot over time. They become an ever bigger problem to manage and maintain, costing you time, effort, money and lost opportunities due to blocking to progress. There comes a day that creative solutions won’t pop up anymore like the one in this blog post  Windows XP Clients Cannot Execute Logon Scripts against a Windows Server 2012 R2 Domain Controller – Workaround and more recently this on where people just waited to long to move AD over from Windows Server 2003 to something more recent It turns out that weird things can happen when you mix Windows Server 2003 and Windows Server 2012 R2 domain controllers. All situations where not moving ahead out of fear to break stuff actually broke the stuff.

In the environments I manage I look at the technology stack and plan the technologies that will be upgraded in the coming 12 months in the context of what needs to happen to support & sustain initiatives. This has the advantage that the delta between versions & technologies can never become to big. It avoids risk because it doesn’t let delta grow for 10 years an blocks introducing “solutions” that only supports old technology stacks. It make sure you never fall behind too much, pay off existing technology debt in a timely fashion and opens up opportunities & possibilities. That’s why our AD is running Windows Server 2012 R2 and our ADFS was moved to 3.0 already. It’s not because a lot of things have become commodities you should hand ‘m over to the janitor in break/fix mode. Oh the simplicity by which some wander this earth …

Observe, Orient, Decide, Act. Right now in 2014 we’ve given management and  every product/application owner their marching orders. Move away from any Windows 2008 / R2 server that is still in production. Why? They demand a modern capable infrastructure that can deliver what’s needed to grasp opportunities that exits with current technology. In return they cannot allow apps to block this. It’s as easy and simple as that. And we’ll stick to the 80/20 rule to call it successful and up the effort next year for the remainder. Whether it’s an informal group of dedicated IT staff or a full blown ITIL process that delivers that  doesn’t matter. It’s about the result and if I still see Windows 7 or Windows 2008 R2 being rolled out as a standard I look deeper and often find a slew of Windows 2003 or even Windows 2000 servers, hopefully virtualized by now. But what does this mean? That you’re in a very reactive modus & in a bad place. Courage & plans are what’s needed. Combine this with skills to deal with the fact that no plan ever woks out perfectly. Or as Mike Tyson said “Everybody has a plan until they get punched in the mouth. … Then, like a rat, they stop in fear and freeze.”

Organizations that still run XP and Windows Server 2003 are paralyzed by fear & have frozen even before they got hit. Hiding behind whatever process or methodology they can (or the abuse of it) to avoid failure by doing the absolute minimum for the least possible cost. Somehow they define that as success and it became a mission statement. If you messed up with XP, there’s very little time left to redeem yourself and avoid the same shameful situation with Windows Server 2003. What are you waiting for? Observe, Orient, Decide, Act.

Are old applications holding you back getting rid of Windows XP? It’s A reason we hear a lot and these apps do exist. But often it’s because the effort to make it work isn’t considered worth the cost. Year after year. So some people today are stuck on a Windows Server 2000/2003 & XP infrastructure. How does that cost compare now to the cost of dealing with the application? Was it worth not moving the application & have an out of date infrastructure holding your ENTIRE company down?

While some things can’t be fixed, putting in some effort could have prevented you of being in this mess. Yes it would have cost you a decent penny but nothing compared to where you are at now with your infrastructure “challenges”.

Here’s a little example for you. Over a period of 13 years we’ve moved an old application (using a Borland database engine & ISAPI DLLs in IIS). It ran on Windows Server 2000. It was P2V’d to VMware Server. Over the years the data base swapped from Informix to SQL Server 2000, 2005, 2008, 2008 R2. We upgraded the VM to Windows Server 2003(x86), moved to Hyper-V, upgraded to Windows 2008(x86) & final now put on W2K12R2(x64). So what do you mean you can’t get rid of XP? We’ve moved the client app for that VM to x64 with Vista in 2007.  We were not to let that app block our way to the future and Windows 7(x64) and Windows 8 & 8.1(x64). In 2014 you should be able to move to or you need to reconsider your approach to IT as you have totally painted the organization into a corner. We did not have installers for anything. We extracted registry entries & bits form installed systems and build installers ourselves with the free NSIS installer. We used  Windows SysInternals tools to figure out where the application wrote & read, what permissions where needed and add those to the installer to make sure it did not need local admin rights. It gave the business over a decade to get a grip on application live cycle management & replace the app. They failed twice, and while that’s bad and we do not like it, it was not deadly as they haven’t let the rest of the company suffer for it. Never, ever let your infrastructure get stuck in the past. But wait you say, what you did is not supported. That’s right. That’s one app, that works, and it beats being left with an unsupportable infrastructure blocking progress

You might need some help and here’s a great place to start helping yourself The App Compat Guy. Read and view (TechEd presentations) anything Chris Jackson is offering on this subject and you’ll be on your way. Need a helping hand? Here’s a good place to start if your in Belgium: Microsoft Extended Experts Team (MEET). Chances are some of them known some one who knows how to get it done or are the person to talk to.