When you’re investigation and planning large repositories for data (backups, archive, file servers, ISO/VHD stores, …) and you’d like to leverage Windows Data Deduplication you have too keep in mind that the maximum supported size for an NTFS volume is 64TB. They can be a lot bigger but that’s the maximum supported. Why, well they guarantee everything will perform & scale up to that size and all NTFS functionality will be available. Functionality on like volume shadow copies or snapshots. NFTS volumes can not be lager than 64TB or you cannot create a snapshot. And guess what data deduplication seems to depend on?

Here’s the output of Get-DedupeStatus for a > 150TB volume:

Note “LastOptimizationResultMessage      : A volume shadow copy could not be created or was unexpectedly deleted”.

Looking in the Deduplication even log we find more evidence of this.

Data Deduplication was unable to create or access the shadow copy for volumes mounted at "T:" ("0x80042306"). Possible causes include an improper Shadow Copy configuration, insufficient disk space, or extreme memory, I/O or CPU load of the system. To find out more information about the root cause for this error please consult the Application/System event log for other Deduplication service, VSS or VOLSNAP errors related with these volumes. Also, you might want to make sure that you can create shadow copies on these volumes by using the VSSADMIN command like this: VSSADMIN CREATE SHADOW /For=C:

Now there are multiple possible issues that might cause this but if you’ve got a serious amount of data to backup, please check the size of your LUN, especially if it’s larger then 64TB or flirting with that size. It’s temping I know, especially when you only focus on dedup efficiencies. But, you’ll never get any dedupe results on a > 64TB volume. Now you don’t get any warning for this when you configure deduplication. So if you don’t know this you can easily run into this issue. So next to making sure you have enough free space, CPU cycles and memory, keep the partitions you want to dedupe a reasonable size. I’m sticking to +/- 50TB max.

I have blogged before on the maximum supported LUN size and the fact that VSS can’t handle anything bigger that 64TB here Windows Server 2012 64TB Volumes And The New Check Disk Approach. So while you can create volumes of many hundreds of TB you’ll need a hardware provider that supports bigger LUNs if you need snapshots and the software needing these snapshots must be able to leverage that hardware VSS provider. For backups and data protection this is a common scenario. In case you ask, I’ve done a quick crazy test where I tried to leverage a hardware VSS provider in combination with Windows Server data deduplication. A LUN of 50TB worked just fine but I saw no usage of any hardware VSS provider here. Even if you have a hardware VSS provider, it’s not being used for data deduplication (not that I could establish with a quick test anyway) and to the best of my knowledge I don’t think it’s possible, as these have not exactly been written with this use case in mind. Comments on this are welcome, as I had no more time do dig in deeper.

To wave goodbye to 2012 I’m posting the latest screenshot of the easiest and very effective money saving feature you got in Windows Server 2012 than RTM in August. Below you’ll find the status report of a backup LUN in a small environment.  Yes those are real numbers in a production environment. 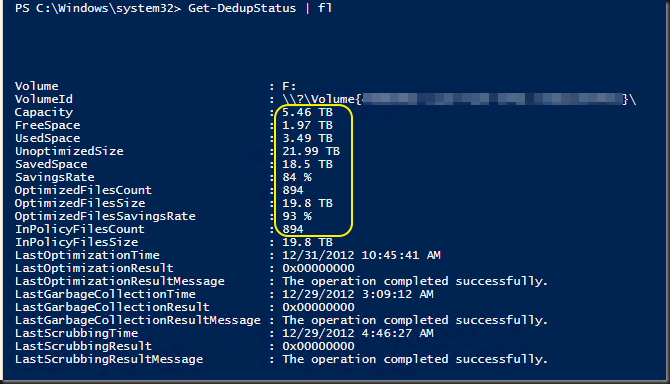 If you are not using it; you’re really throwing away vast amounts of money on storage right this moment. If you’re in the market for a practical, economical and effective backup solution my advice you to  is the following. Scrap any backup vendor or product that prevents it files of LUNs being duplicated  by Windows Server 2012.  They might as well be robbing you at gun point.

I wish you all a great end of 2012 and a magnificent 2013 ahead. In 2013 we’ll push Windows Server 2012 into service where we couldn’t before (waiting for 3 party vendor support and if they keep straggling they are out of the door) and work at making our infrastructure ever more resilient an protected.  With System Center SP1 some products of that suite will make a come back in our environment. 10Gbps is bound to become the standard all over our little data center network and not just our most important workloads.

I’ve discussed this before in Windows Server 2012 Deduplication Results In A Small Environment but here’s a little updated screenshot of a backup volume:

There is a small environment that provides web presence and services. In total there a bout 20 production virtual machines. These are all backed up to a Transparent Failover File Share on a Windows Server 2012 cluster that is used to host all the infrastructure and management services.

The LUN/Volume for the backups is about 5.5 TB of storage is available. The folder layout is shown in the screenshot below. The backups are run “in guest” using native Windows Backup which has the WindowsImageBackup subfolder as target. Those backups are  archived to an “Archives” folder. That archive folder is the one that gets deduplicated, as the WindowsImageBackup folder is excluded. 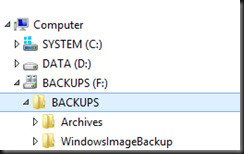 This means that basically the most recent version is not deduplicated guaranteeing the fastest possible restore times at the cost of some disk space. All older (> 1 day) backup files are deduplicated. We achieve the following with this approach:

About 20 virtual machines are backed up every week (small delta and lots of stateless applications).As the optimization runs we see the savings grow. That’s perfectly logical. The more backups we make of virtual machines with a small delta the more deduplication can shine. So let’s look at the results using Get-DedupStatus | fl 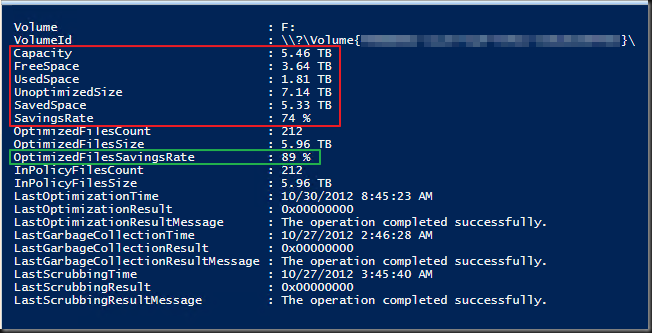 A couple of weeks later it looks like this.

Give it some more months, with more retained backusp, and I think  we’ll keep this around 88%-90% .From tests we have done (ddpeval.exe) we think we’ll max out at around 80% savings rate. But it’s a bit less here overall because we excluded the most recent backups. Guess what, that’s good enough for us

. It beats buying extra storage of paying a wad of money for disk deduplication licenses from some backup vendor or appliance. Just using the build in deduplication mechanisms in Windows Server 2012 Server saved us a bunch of money.

The next step is to also convert the production  Hyper-V cluster to Windows Server 2012 so we can do host based backups with the native Windows Backup that now supports Cluster Shared Volumes (another place where that 64TB VHDX  size can come in handy as Windows backup now writes to VHDX). 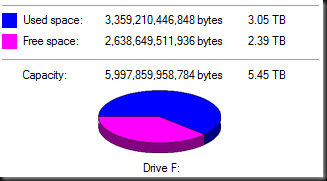 The volume reports we’re using 3TB in data. So 2.4TB is free. 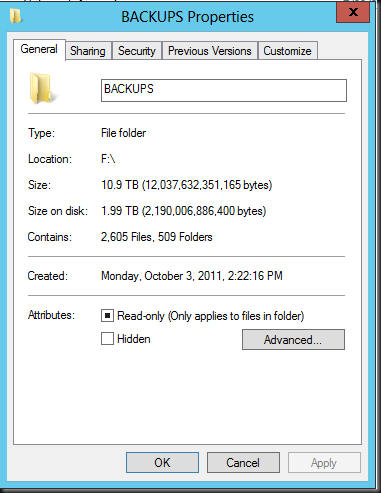 So the properties of the volume reports more disk space used that the actual folder containing the data. Let’s use WinDirStat to have a look. 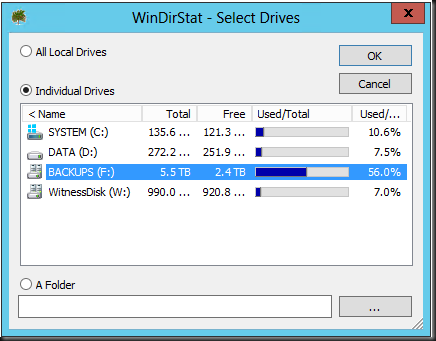 So the above agrees with the volume properties. In the details of this volumes we again see about 2TB of consumed space.

Could it be that the volume might is reserving some space ensure proper functioning?

When you dive deeper things we get some cool view of storage space used.. Where Windows Explorer is aware of deduplication and shows the non deduplicates size for the vhd file, WinDirStat does not, it always shows shows the size on disk, which is a whole lot less. 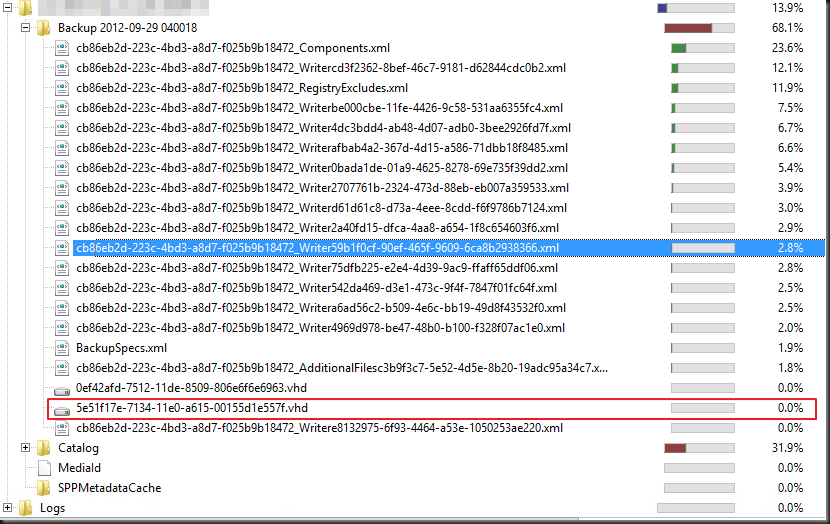 This is the same as when you ask for the properties of a file in Windows Explorer. 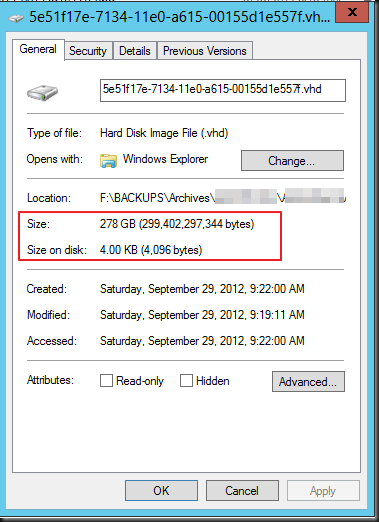 Is it the best solution for everyone? Not always no. The deduplication is done on the target after the data is copied there. So in environments where bandwidth is seriously constrained and there is absolutely no technical and/or economical way to provide the needed throughput this might not be viable solution. But don’t dismiss this option to fast. In a lot of scenarios is it is very good and cost effective feature. Technically & functionally it might be wiser to do it on the target as you don’t consumes to much memory (deduplication is a memory hog) an CPU cycles on the source hosts. Also nice is that these dedupe files are portable across systems. VEEAM has demonstrated some nice examples of combing their deduplication with Windows dedupe by the way. So this might also be an interesting scenario.

Financially the the cost of deduplication functionality with hardware appliances or backup software hurts like the kick of a horse straight onto the head. So even if you have to invest a little in bandwidth and cabling you might be a lot better of. Perhaps, as you’re replacing older switches by new 1Gbps or 10Gbps gear, you might be able to recuperate the old ones as dedicated backup switches. We’re using mostly recuperated switch ports and native Windows NIC teaming, it works brilliantly. I’ve said this before, saving money whilst improving operations rarely gets you fired. The sweet thing about this that this is achieved by building good & reliable solutions, which means they are efficient even if it costs some money to achieve. Some managers focus way to much on efficiency from the start as to them means nothing more than a euphemism for saving every € possible. Penny wise and Pound foolish. Bad move. Efficiency, unless it is the goal itself, is a side effect of a well designed and optimized solution. A very nice and welcome one for that matter, but it’s not the end all be all of a solution or you’ll have the wrong outcome.