So here I go again. I’m of to TechEd 2013 Europe in Madrid at the IFEMA’s Convention and Congress Centers.

I have not missed one this century. It’s such a great conference, where I get to meet & talk to so many people I can learn from, that I always try to make it. This year will be a very interesting one as the R2 wave is flooding us with information and we’ll get the pre view bits in the week of TechEd (26th of June)!

Even in this day and age of on line content & conferences there is tremendous value in attending a good tech event like this. For one you can give you undivided attention to what’s going on. You can talk to the presenters and the many experts (program managers, regional directors, MVPs, vendor technicians) & colleagues that are their to talk shop & get you questions answered. I also have some side sessions to attend an people to meet. It pays to get out off the office and do this. We need a sustained effort to keep up, train, learn and educate our selves. Attending TechEd is part of that effort. There is no doubt in my mind that a conference done right  pays itself back multiple times.

Hope to see you there and if not don’t forget there’s a lot of live streaming going on. Next to that you can get the content on line the day after. Take advantage of this here. 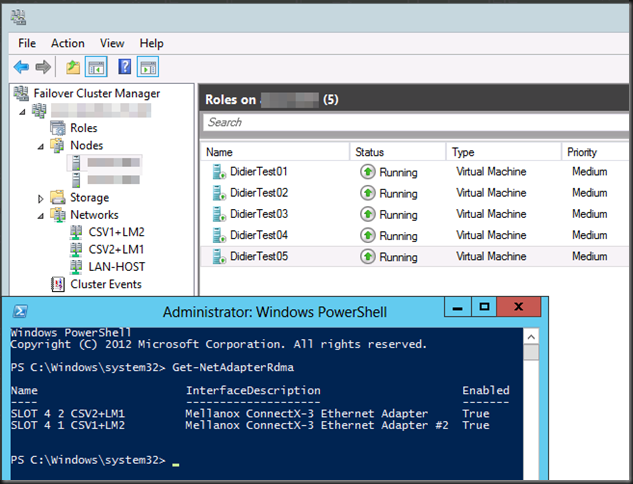 Last Friday I was working on some Windows Server 2012 Hyper-V networking designs and investigating the benefits & drawbacks of each. Some other fellow MVPs were also working on designs in that area and some interesting questions & answers came up (thank you Hans Vredevoort for starting the discussion!)

You might have read that for low cost, high value 10Gbps networks solutions I find the switch independent scenarios very interesting as they keep complexity and costs low while optimizing value & flexibility in many scenarios. Talk about great ROI!

So now let’s apply this scenario to one of my (current) favorite converged networking designs for Windows Server 2012 Hyper-V. Two dual NIC LBFO teams. One to be used for virtual machine traffic and one for other network traffic such as Cluster/CSV/Management/Backup traffic, you could even add storage traffic to that. But for this particular argument that was provided by Fiber Channel HBAs. Also with teaming we forego RDMA/SR-IOV.

For the VM traffic the decision is rather easy. We go for Switch Independent with Hyper-V Port mode. Look at Windows Server 2012 NIC Teaming (LBFO) Deployment and Management to read why. The exceptions mentioned there do not come into play here and we are getting great virtual machine density this way. With lesser density 2-4 teamed 1Gbps ports will also do.

But what about the team we use for the other network traffic. Do we use Address hash or Hyper-V port mode. Or better put, do we use native teaming with tNICs as shown below where we can use DCB or Windows QoS? 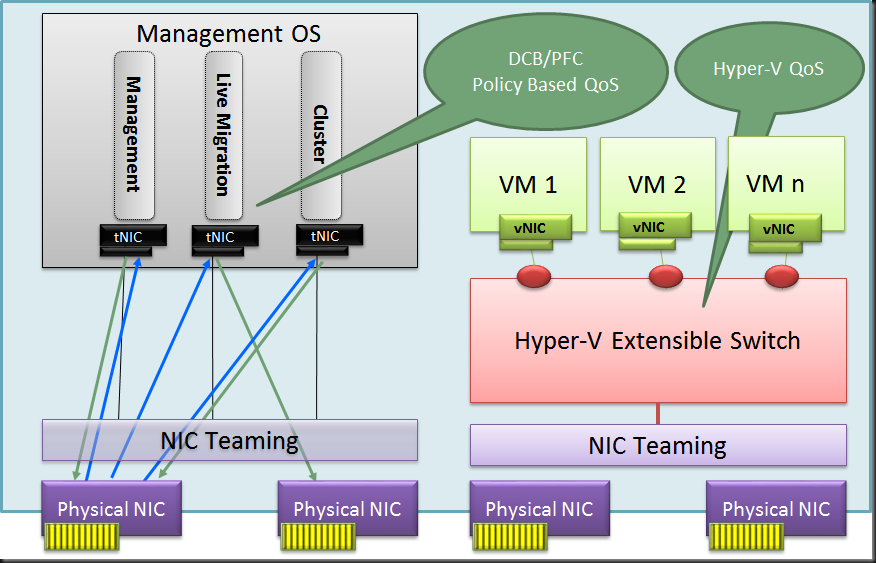 Well one drawback here with Address Hash is that only one member will be used for incoming traffic with a switch independent setup. Qos with DCB and policies isn’t that easy for a system admin and the hardware is more expensive.

So could we use a virtual switch here as well with QoS defined on the Hyper-V switch? 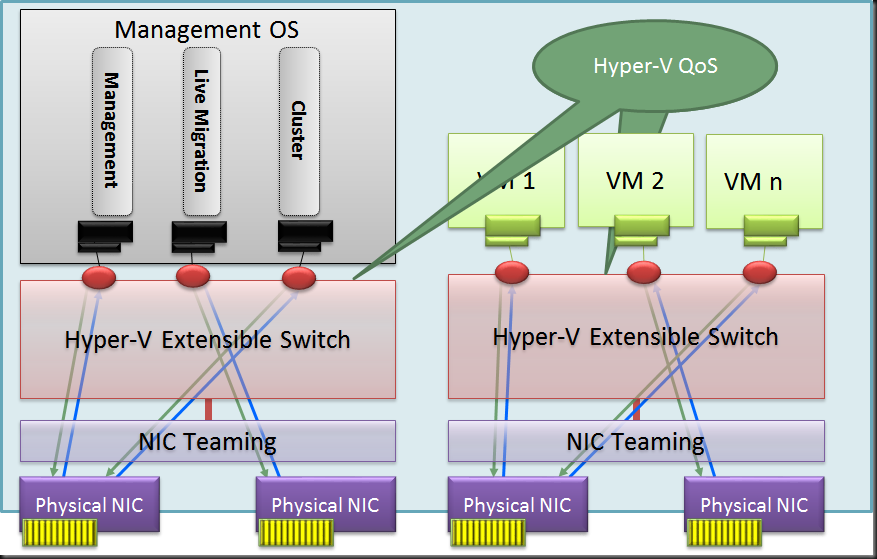 Well as it turns out in this scenario we might be better off using a Hyper-V Switch with Hyper-V Port mode on this Switch independent team as well. This reaps some real nice benefits compared to using a native NIC team with address hash mode:

With a dual 10Gbps team you’re ready to roll. All software defined. Making the switches just easy to use providers of connectivity. For smaller environments this is all that’s needed. More complex configurations in the larger networks might be needed high up the stack but for the Hyper-V / cloud admin things can stay very easy and under their control. The network guys need only deal with their realm of responsibility and not deal with the demands for virtualization administration directly.

I’m not saying DCB, LACP, Switch Dependent is bad, far from. But the cost and complexity scares some people while they might not even need. With the concept above they could benefit tremendously from moving to 10Gbps in a really cheap and easy fashion. That’s hard (and silly) to ignore. Don’t over engineer it, don’t IBM it and don’t go for a server rack phD in complex configurations. Don’t think you need to use DCB, SR-IOV, etc. in every environment just because you can or because you want to look awesome. Unless you have a real need for the benefits those offer you can get simplicity, performance, redundancy and QoS in a very cost effective way. What’s not to like. If you worry about LACP etc. consider this, Switch independent mode allows for nearly no service down time firmware upgrades compared to stacking. It’s been working very well for us and avoids the expense & complexity of vPC, VLT and the likes of that. Life is good.

Well, that time of the year is getting closer again. It’s something different, unique and somewhat exclusive. It’s the 2013 MVP Global Summit!

For this summit MVPs from all over the world converge on Bellevue/Redmond near Seattle. The summit takes place on and around the Microsoft campus. To discuss their favorite & most important MSFT technologies in depth amongst each other and with Microsoft staff.

I have the good fortune of being able to attend again this year. I have to express my thanks to our top management for this

. This is very valuable to both me and my employers. It’s also fun to discuss the technology you work with amongst so many like minded people in the same business. The amount of knowledge sharing, insights and ideas around Redmond creates a stimulating buzz and I loved every moment of it last year. I met many great professionals and interesting people with whom, from breakfast till after dinner drinks, we had a truckload of interesting discussions. It’s a bit of a geek fest.

So I’m looking forward to all this and also to meeting up again with some MSFT employees and professionals from the Seattle area I got to know last time.

The MVP summit is also a good time to pass feedback from others on to Microsoft as well. You’re not in the drivers seat when it comes to the direction Windows and Hyper-V will take. However, you cannot have your opinions taken into consideration unless you let them be be heard. So, please feel free to share any remarks, feedback, feature requests you’d like to the virtualization, cluster, storage, file share, network, etc. product teams to know. You can post them in the comments for all to see. To shy to post it publicly? You can send me a e-mail via the contact form on my blog or direct message me via @workinghardinit on twitter.

Now the entire summit is under NDA (Non Disclosure Agreement) but that doesn’t mean it’s a pure diplomatic mission. We all love the technology, that is for sure, but we also  pass along the bad and the ugly next to the good. It’s not marketing or indoctrination,if it was MVPs would not spend the time an money to attend.

That’s where the words “independent” and real world” comes into play. We’re not a bunch of fan boys. The communication is both ways and I think that make this event extra valuable to both parties. I’m looking forward to the 2013 MVP Summit and I have a lot of feedback and questions based on using Windows Server 2012 and Hyper-V in real live.