As 25Gbps (SPF28) is on route to displace 10Gbps (SFP+) from its leading role as the work horse in the datacenter. That means that 10Gbps is slowly but surely becoming “the LOM option”. So it will be passing on to the role and place 1Gbps has held for many years. What extension slots are concerned we see 25Gbps cards rise tremendously in popularity. The same is happening on the switches where 25-100Gbps ports are readily available. As this transition takes place and we start working on acquiring 25Gbps or faster gear the question about SPF+ and SFP28 compatibility arises for anyone who’s involved in planning this.

When I got really deep into 10Gbps about 7 years ago I was considered a bit crazy and accused of over delivering. That was until they saw the speed of a live migration. From Windows Server 2012 and later versions that was driven home even more with shared nothing and storage live migration and SMB 3 Multichannel SMB Direct.

On top of that storage spaces and SOFS came onto the storage scene in the Microsoft Windows server ecosystem. This lead us to S2D and storage replica in Windows Server 2016 and later. This meant that the need for more bandwidth, higher throughput and low latency was ever more obvious and clear. Microsoft has a rather extensive collection of features & capabilities that leverage SMB 3 and as such can leverage RDMA.

In this time frame we also saw the strong rise of All Flash Array solutions with SSD and NVMe. Today we even see storage class memory come into the picture. All this means even bigger needs for high throughput at low latency, so the trend for ever faster Ethernet is not over yet.

That means that 10Gbps is slowly but surely becoming the LOM option and is passing on to the role 1Gbps has held for many years. In our extension slots we see 25-100Gbps cards rise in popularity. The same is happening on the switches where we see 25, 50, 100Gbps or even higher. I’m not sure if 50Gbps is ever going to be as popular but 25Gbps is for sure. In any case I am not crazy but I do know how to avoid tech debt and get as much long term use out of hardware as possible.

When it comes to SPF+ and SFP28 compatibility we’re golden. SFP+ and SPF28 share the same form factor & are “compatible”. The moment I learned that SFP28 share the same form factor with SFP+ I was hopeful that they would only differ in speed. And indeed, that hope became a sigh of relief when I read and experimentally demonstrated to myself the following things I had read:

For a migration path that is phased over time this is great news as you don’t need to have everything in place right away from day one. I can order 25Gbps NIC in my servers now, knowing that they will work with my existing 10Gbps network. They’ll be ready to roll when I get my switches replaced 6 months or a year later. Older servers with 10Gbps SPF+ that are still in production when the new network gear arrives can keep working on new SPF28 network gear.

Do note that SPF+ modules will work in SPF28 ports and vice versa but you have to be a bit careful:

If you have all your gear from a vendor specializing in RDMA technology like Mellanox this detects this all this and takes care of everything for you. Between vendors and 3rd party cables pay extra attention to verifying all will be well.

SPF+ and SFP28 compatibility is also important for future proofing upgrade paths. When you buy and introduce new network gear it is nice to know what will work with what you already have and what will work with what you might or will have in the future. Some people will get all new network switches in at once while others might have to wait for a while before new servers with SPF28 arrive. Older servers might be around and will not force you to keep older switches around just for them.

Compatibility is also important for purchase decision as you don’t need to match 25Gbps NIC ports to 25Gbps switch ports. You can use the QFSP28 cables and split them to 4 * 25Gbps SFP28. 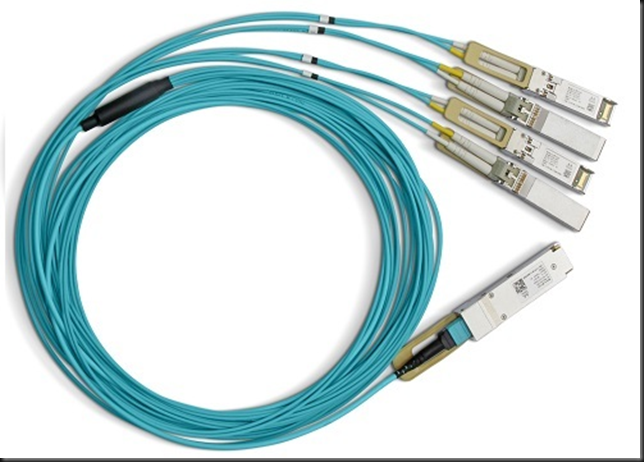 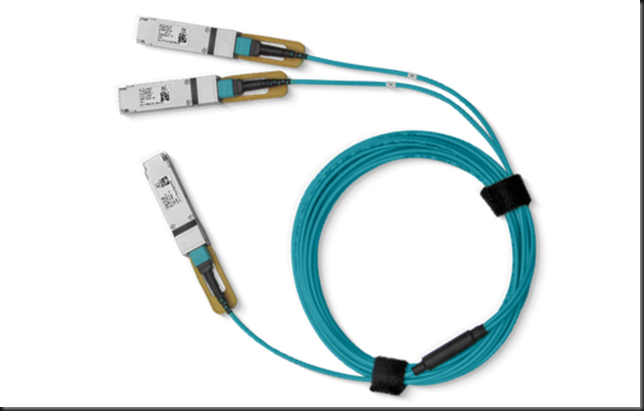 This means you can have switch port density and future proofing if you so desire. Some vendors offer modular switches where you can mix port types (Dell EMC Networking S6100-ON)

More bandwidth at less cost is a no brainer. It also makes your bean counters happy as this is achieved with less switches and cables. That also translates to less space in a datacenter, less consumption of power and less cooling. And the less material you have the less it cost in operational costs (management and maintenance). This is only offset partially by our ever-growing need for more bandwidth. As converged networking matures and becomes better that also helps with the cost. Even where economies of scale don’t matter that much. The transition to 25Gbps and higher is facilitated by SPF+ and SFP28 compatibility and that is good news for all involved.

As readers of my blog will know very well is that one of my track records is that I’m fairly successful in keeping technology debt low. One of the workloads I have always moved successfully over the years are file servers. Right now, almost all, almost everywhere, are the goodness of SMB3 and are high available clustered file server roles. You can read about some of those efforts in some of my blogs:

Sometimes this cans quite a challenge but over the years I have gained the experience and expertise to deal with such projects. Not everyone is in that position. This leads to aging file services, technology debt, security risks, missed opportunities (SMB3 people!) and often even unsupported situations in regards to hardware and software. While since the release of Windows Server 2016 this image has shifted a bit, you can clearly see the pretty depressing state of file services. Windows rules the on premises server world but the OS versions are aging fast. 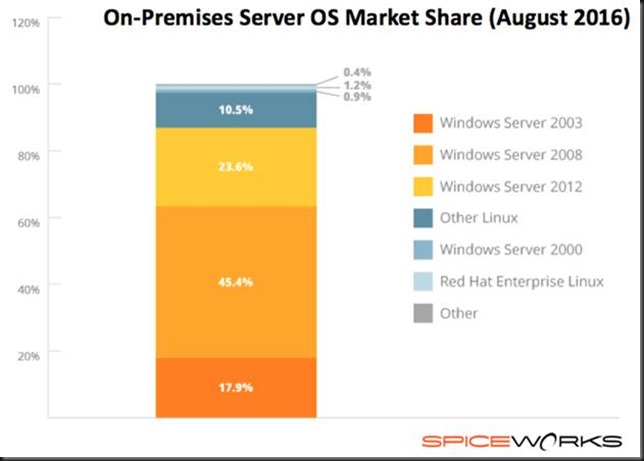 The operating systems are ancient, old or aging and we all know what this means in regards to the SMB version in use.

Now I work hard, effective and efficiently but I cannot be everywhere. Luckily for you Microsoft has a great new capability coming up in Windows Server 2019, the Windows Server Storage Migration Service. 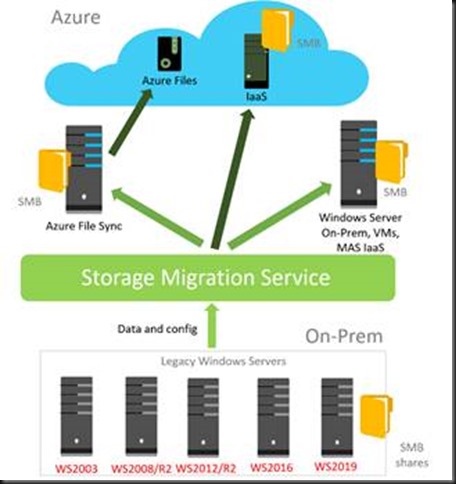 Thanks to Ned Pyle and his team’s efforts you can no aspire to me as successful as me when it comes to migrating file services to newer environments. It’s like having WorkingHardInIT in a Windows feature. Isn’t that cool?! If they sold that separately they would make a pretty penny but they luckily for you include it with their new server OS version.

Storage Migration Servers deals with many of the usual problems and intricacies of a storage / file service migration. It will handle things like share settings, security settings, network addresses and names, local accounts, encrypted data, files that are in use etc. To handle you project you have a GUI and PowerShell automation at your disposal. Windows Server 2019 is still being perfected and you can still provide feedback while testing this feature.

Things to note for now (bar the requirements for testing as described in Ned Pyle’s blog) are:

Supported source operating systems VM or hardware (to migrate from):

Supported destination operating system VM or hardware (to migrate to):

* Technically your destination for migration can be any Windows Server OS, but we aren’t testing that currently. And when we release the faster and more efficient target proxy system in a few weeks it will only run on Windows Server 2019.

In my humble opinion that almost has to be Storage Replica technology being leveraged. Something that has been proven to be very much more efficient that copying files. Microsoft already promotes Storage Replica to other server or itself as a way of moving data to a new LUN.

Anyway, this is a cool feature that should grab your attention. Thank you Ned Pyle and team! And while you’re busy putting this great capability into Windows Server 2019 (Standard and Datacenter) consider doing the same for full featured Storage Replica in Windows Server 2019 Standard .