Those test and demos were done with block lever storage, CSV on Fibre Channel, iSCSI or shared SAS. Today we’ll look at the experience when you’re running your VMs on a continually available file share on a Scale Out File Server (SOFS). This configuration offers the best possible experience.

Why well, when the cluster node is in Isolated mode this has no impact on the SOFS share as this is a resource external to the Hyper-V cluster. In other words it remains on line. This means that the VMs, even if they have lost their high availability during the time the node is Isolated, they keep running. After all there is nothing wrong with Hyper-V itself. With block level CSV storage you lose access to the storage as that a cluster resource and the node got isolated. That’s why the VMs go into a paused critical state during a transient failure with block level storage but they don’t when you’re using SOFS.

The virtual machine compute resiliency feature in action shows you that the VMs service a transient failure without issues. Your services need never know something was up. Even when the transient failure is reoccurring that doesn’t mean it will cause down time. The node will be quarantined and if it come backup the workload will be live migrated away.

You can watch a video of this in action here on Vimeo: 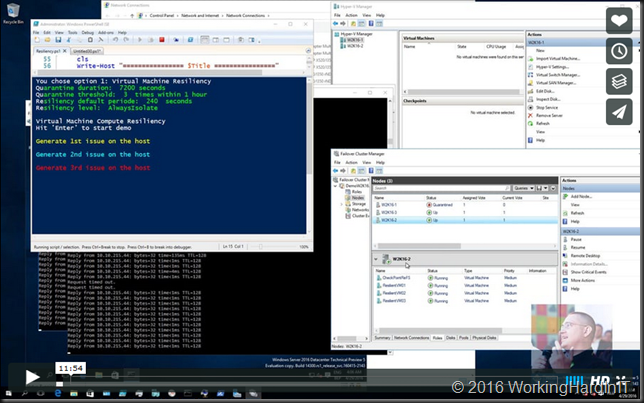 The quarantine threshold and duration as well as the resiliency period and can be tweaked to your environment to get the best possible results.

SMB 3 for the win! This is yet one more convincing argument to start looking into SOFS and leveraging the capabilities of SMB3. Remember that you can run as SOFS cluster against your existing shared storage to get started if you can get the IOPS/latency you require. But also look into storage spaces, especially storage spaces direct which avoids some of the drawback SANs have in such a scenario. High time for storage vendors to really scale out, implement SMB 3 well and complete and keep the great added value features they already have in their offering. It’s this or becoming yet a bit more irrelevant in todays storage scene in the Microsoft ecosystem.

I went to have a chat with Dell at TechEd 2013 Europe in Madrid. The VRTX was launched during DELL Enterprise Forum early June 2013 this concept packs a punch and I encourage you to go look at the VRTX (pronounced as “Vertex”) in more detail here. It’s a very quite setup which can be hooked up to standard power. Pretty energy efficient when you consider the power of the VRTX. And the entire setup surely packs a lot of punch at an attractive price point.

It can serve perfectly for Remote Office / Branch Office (ROBO) deployments but has many more use cases as it’s very versatile. In my humble opinion DELL’s latest form factor could be used for some very nice scale out scenarios. It’s near perfect for a Windows Server 2012 Scale Out File Server (SOFS) building block. While smaller ones can be build using 1Gbps the future just needs 10Gbps networking.

That’s the first thing I missed and the first thing I was told that would arrive very soon. So I’m  very happy with that. With sufficient 10Gbps ports to servers and  iWarp or RoCE RDMA capable NICs (there’s cheap enough compared to ordinary 10Gbps cards not to have to leave that capability out) we have all we need to function as powerful building block for the Scale Out File Server model with Windows Server 2012 (R2) where the CSV network becomes the storage network leveraging redirected IO. For this concept look at this picture from a presentation a year ago. SMB 3.0 Multichannel and RDMA make this possible. 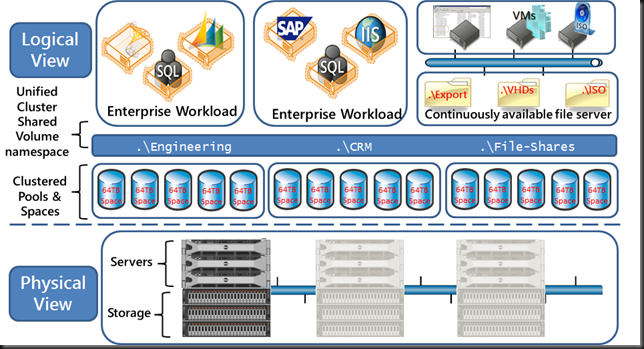 While then I drew the SOFS building blocks out of R720 7 & MD1200  hardware, the VRTX could fit in there perfectly!

Today DELL uses their implementation of Clustered PCI Raid for shared storage which is supported since Windows Server 2012. This is great. For the moment it’s a non redundant setup but a redundant one is in the works I’m told. Nice, but think positive, redirected IO  (block level) over SMB 3.0 would save our storage IO even today. It would be a very wise and great addition to the capabilities of this building block to add the option & support for Storage Spaces. This would make the Scale Out File Server concept shine with the VRTX.

Why? Well I would give us following benefits in the storage layer and the VHDX format in Hyper-V can take benefits :

Look at that feature set people, in box, delivered by Windows. Sweet! Combine this with 10Gbps networking and DELL has not only a SOFS building block in their port folio, it also offers significant storage features in this package. I for one would like them to do so and not miss out on this opportunity to offer even more capabilities in an attractive price package. Dell could be the very first OEM to grab this new market opportunity by supporting the scale out approach and out maneuver their competitors

Combine such a building block as described above with their unmatched logistical force for distribution and support this will be a hit a a prime choice for Windows shops. They already have the 10Gbps networking gear & features (DCB) in the PowerConnect 81XX & Force10 S4810 switches. It could be an unbeatable price / capabilities / feature combo that would sell very well.

If we go for SOFS we might need more storage in a single building block with a 4 node cluster. Extensibility might be nice for this. More not just as in capacity but I need to work out the IOPS the available configurations can give us.