This question came up recently, once again, and deserves it a little blog post. If you want to see the benefits of ODX you’ll need to connect your virtual disks to a vSCSI controller or other supported controller option. These are iSCSI, vFC, a SMB 3 File Share or a pass-through disk. But unless you have really good reason to use pass-through disks, don’t. It’s limiting you in to many ways.

It goes without saying you need to store any virtual disks  involved on ODX capable LUNs via iSCSI, FC, FCoE, SMB 3 File Share or SAS for ODX to be available to the virtual machine.

Also beware that ODX only works on NTFS partitioned disks. The files cannot be compressed or encrypted.  Sparse files are not supported either. And finally, the volume cannot be BitLocker protected.

Here’s a screenshot of a copy of 30GB worth of ISO files to a VHDX attached to a vSCSI controller: 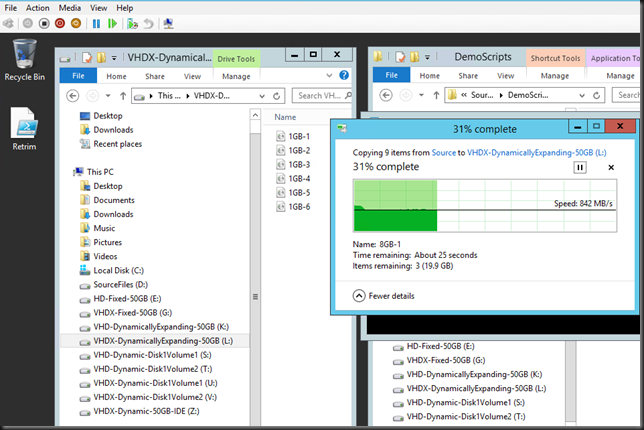 Here’s a screenshot of a copy of 30GB worth of ISO files to a VHDX attached to a vIDE controller. 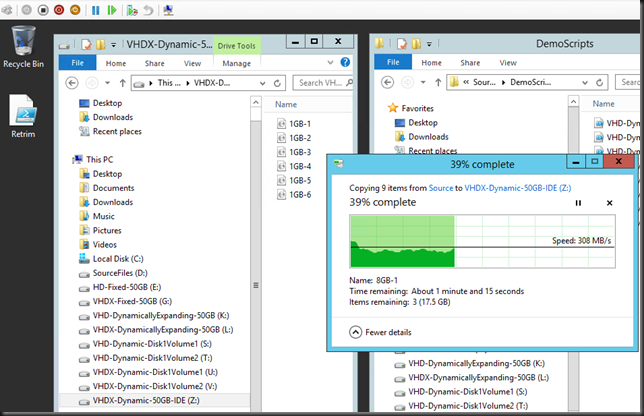 You’ll notice quite a difference. Depending on the load on the controllers/SAN it’s on average 3 times slower than the same action to a VHDX disk on a vSCSI controller.

Some technlogies you just need to see in action instead of reading about it. I have posted a video on Vimeo that shows ODX in action on Windows Server 2012 R2 and a DELL Compellent SAN running Storage Center 6.3.10 firmware that supports UNMAP & ODX. Watch the video here or on Vimeo itself for a better experience. It’s a rerun of the demo scripts used in my TechNet Belux Live Meeting of this week.

We demonstrate the amazing speeds at which we can create VHDX files on both a traditional clustered disk and a Cluster Shared Volume. If you have ever tried to create a lot of fixed VHD/VHDX files, especially larger one, then you really need to check out ODX and its potential. If you have a SAN or think about acquiring one make sure you get this feature and be sure that it works as advertised.

I hope you enjoy it and inspires you to look where you can leverage this technology in your own environments.

Windows Server 2012 has brought us unseen capabilities & performance enhancements that make it a future proof fundament for many versions to come and it is ready for the ever accelerating pace of hardware improvements. R2 has fine tuned some points and added improvements that are stepping stones to better today and even greater in vNext. I’d like to invite you to a free TechNet Live Meeting on Hyper-V Storage Efficiencies & Optimizations in Windows Server 2012 R2 and look at some of these capabilities with me.

As a virtualization guy two subjects are very dear to me and that is networking & storage, and this event is about a subset of the storage improvements. You might have heard about ODX and UNMAP but you have not had the change to play with it. You have read about the tremendous scalability of the IOPS in a VM and about large sector support for the next generation of hard disks drives. Well some of these we’ll demonstrate (ODX, UNMAP, Dynamically expanding VHDX performance) if the demo gods are with us. Others we’ll discuss so you’ll know where this comes into play and how you’ll benefit from them even without realizing you do. So without further delay register for the free TechNet Live Event here.

Some things are easier to show using a video so have a look at a video on UNMAP/ODX used with Windows Server 2012 R2 and Compellent SAN:

We start out with a 10.5TB large thinly provisioned LUN that has about 203GB of space in use on the SAN. So the LUN on the SAN might be 10.5TB and windows sees a volume that is 10.5TB only the effective data stored consumes storage space on the SAN. That ought to demonstrate the principle of thin provisioning adequately

. The nice PowerShell counter is made possible via the Compellent PowerShell Command Set.

We then copy 42GB worth of ISO files inside a Windows Server 2012 virtual machine from a fixed VHD to a dynamically expanding VDHX. Those are nice speeds. And look at how the size of the VHDX file grows on the CSV volume and how the space used on the SAN is growing. That’s because the LUN is thinly provisioned.

Secondly we copy the same ISO files to a fixed size VHDX. Again, some really nice speeds. As the VHDX is fixed in size you do not see it grow. When looking at the little SAN counter however we do see that the thinly provisioned LUN is using more storage capacity.

Once that is done we see that the total space consumed on the SAN for that CSV LUN has risen to 284GB. We then delete the data from both dynamically expanding VHDX and are about to run the Optimize-Volume command when we notice that the SAN has already reclaimed the space. So we don’t run the optimize command. Keep that in mind. By the way, this process is done as part of standard maintenance (defrag) and some NTFS check pointing mechanism that’s run every 5 minutes and sends down the info from the virtual layer to the physical layer to the SAN. During demo’s it’s kind of boring to sit around and wait for it to happen

. Just remember that in real life it’s a zero touch feature, you don’t need to baby sit it.

We then also delete the ISO files from the fixed VHDX and run Optimize-Volume G –Retrim and as result you see the space reclaimed on the SAN. As this is a fixed disk the size of the VDHX will not change. But what about the dynamically expanding VHDX? Well you need to shut it down for that. But hey, nothing happens. So we fire it up again and do run Optimize-Volume H –Retrim before shutting it down again and voila.

So what do you need for this?

Rest assured. You don’t need the most high end, most expensive, complex and proprietary SAN hardware to get this done. What you need is good software (firmware) on quality commodity hardware and you’re golden. If any SAN vendor wants to charge you a license fee for ODX/UNMAP just throw them out. If they don’t even offer it walk away from them and just use storage spaces. There are better alternatives than overpriced SANs lacking features.

I’ve found that systems like Equalogic & Compellent are in the sweet point for 90 % of their markets based on price versus capabilities and features.  Let’s look at the a Compellent for example. For all practical intend this SAN runs on commodity hardware. It’s servers & disk bays. SAS to the storage & FC, iSCSI or SMB/NFS for access. With capable hardware the magic is in the software. Make no mistake about it, commodity hardware when done right, is very, very capable. You don’t need a special proprietary hardware & processors unless for some specialized nice markets. And if you think you do, what about buying commodity hardware anyway at 50% of the cost and replacing it with the latest of the greatest commodity hardware after 4 years and still come out on top cost wise whilst beating the crap out of that now 4 year old ASIC and reaping the benefits of a new capabilities the technology evolutions offers? Things move fast and you can’t predict the future anyway.