A lot of us who build failover clusters are bound to run into the fact that the node names as shown the Failover Cluster Management GUI is not always consistent in the names format  it gives to the nodes. Sometimes they are lower case, sometimes they are upper case. See the example below of a Windows Server 2008 R2 SP1 cluster.

Many a system administrator has some slight neurotic tendencies. And he or she can’t stand this. I’ve seen people do crazy things like trying to fix this up to renaming a node in the registry. Do NOT do that. You’ll break that host. People check whether the computer object in AD is lower or upper case, whether the host name is lower or upper case, check how the node are registered in DNS etc. They try to keep ‘m all in sync at sometimes high cost

But in the end you can never be sure that all nodes will have the same case using the GUI.

So what can you do?

In Windows 2012 PowerShell replaces cluster.exe (it is still there, for backward compatibility but for how long?) and they don’t seem to enforce the case of the names of the node. For more info on Failover Clustering PowerShell look at Failover Clusters Cmdlets in Windows PowerShell, it’s a good starting point.

Don’t despair my fellow IT Pros. Learn to accept that fail over clustering is case insensitive and you’ll never run into any issue. Let it go …. Well unless you get a GUI bug like we had with Exchange 2010 SP1 or any other kind of bug that has issues with the case of the nodes

On an upgraded node I needed to uninstall failover clustering and reinstall it to get it to works, so even in that scenario they are gone and I needed to add them again.

As I mentioned in an introduction post Thinking About Windows 8 Server & Hyper-V 3.0 Network Performance there will be a lot of options and design decisions to be made in the networking area, especially with Hyper-V 3.0. When we’ll be discussing DVMQ (see DMVQ In Windows 8 Hyper-V), SR-IOV in Windows 8 (or VMQ/VMDq in Windows 2008 R2) and other network features with their benefits, drawbacks and requirements it helps to know what Receive Side Scaling (RSS) is. Chances are you know it better than the other mentioned optimizations. After all it’s been around longer than VMQ or SR-IOV and it’s beneficial to other workloads than virtualization. So even if you’re a “hardware only for my servers” die hard kind of person you can already be familiar with it. Perhaps you even "dislike” it because when the Scalable Networking Pack came out for Windows  2003 it wasn’t such a trouble free & happy experience. This was due to incompatibilities with a lot of the NIC drivers and it wasn’t fixed very fast. This means the internet is loaded with posts on how to disable RSS & the offload settings on which it depends. This was done to get stability or performance back for application servers like Exchange and others applications or services.

The Case for RSS

But since Windows 2008 these days are over. RSS is a great technology that gets you a lot better usage of out of your network bandwidth and your server. Not using RSS means that you’ll buy extra servers to handle the same workload. That wastes both energy and money. So how does RSS achieve this? Well without RSS all the interrupt from a NIC go to the same CPU/Core in multicore processors (Core 0).  In Task Manager that looks not unlike the picture below:

Now for a while the increase in CPU power kept the negative effects at bay for a lot of us in the 1Gbps era. But now, with 10Gbps becoming more common every day, that’s no longer the case. That core will become the bottle neck as that poor logical CPU will be running at 100%, processing as much network interrupts in can handle, while the other logical CPU only have to deal with the other workloads. You might never see more than 3.5Gbps of bandwidth being used if you don’t use RSS. The CPU core just can’t keep up. When you use RSS the processing of those interrupts is distributed across al cores.

With Windows 2008 and Windows 2008 R2 and Windows 8 RSS is enabled by default in the operating system. Your NIC needs to support it and in that case you’ll be able to disable or enable it. Often you’ll get some advanced features (illustrated below) with the better NICs on the market. You’ll be able to set the base processor, the number of processors to use, the number of queues etc. That way you can divide the cores up amongst multiple NICs and/or tie NICs to specific cores. 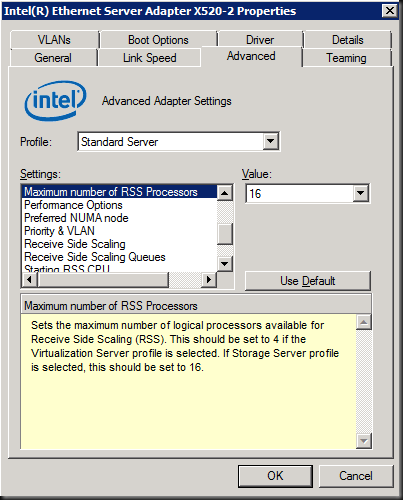 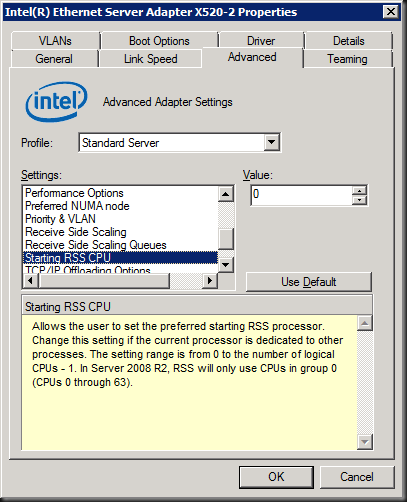 So you can get fancy if needed and tweak the settings if needed for multi NIC systems. You can experiment with the best setting for your needs, follow the vendors defaults (Intel for example has different workload profiles for their NICs) or read up on what particular applications require for best performance.

Information On How To Make It Work

For more information on tweaking RSS you take a look at the following document http://msdn.microsoft.com/en-us/windows/hardware/gg463392. It holds a lot more information than just RSS in various scenarios so it’s a useful document for more than just this.

Another good guide is the "Networking Deployment Guide: Deploying High-Speed Networking Features". Those docs are about Windows 2008 R2 but they do have good information on RSS.

If you notice that RSS is correctly configured but it doesn’t seem to work for you it’ might be time to check up on the other adaptor offloads like TCP Checksum Offload, Large Send Offload etc. These also get turned of a lot when trouble shooting performance or reliability issues but RSS depends on them to work. If turned off, this could be the reason RSS is not working for you..

The Hyper-V team at Microsoft and the Belgian Hyper-V contact at Microsoft are a very communicative and responsive group of people. Every time I have brought a need, a question or a problem to their attention they take it up and deliver a solution, an answer or a fix respectively. An example of this can be found in this blog post https://blog.workinghardinit.work/2010/01/29/microsoft-really-listens-enhances-nvspbind/ on functionality they added to nvspbind on our request.

More recently we ran into an issue with the Windows 2008 SP2 SKUs “Without Hyper-V” which I blogged about in KB2230887 Hotfix for Dynamic Memory with Windows 2008 Standard & Web edition does not apply to without Hyper-V editions?. I also brought this to the attention of John Howard. The reply was swift and positive. The Dynamic Memory owner Serdar was on the case and working with the Windows Sustained Engineering group to provide a re-release of the hotfix so it would support those “Without Hyper-V” SKUs. This has been fixed now as announced on the TechNet forum thread here, just scroll to the latest post. The only negative point here is that they forgot to mention it on the blog post and that you now need to call them to get the hotfix, why this is, I do not know.

Over the years I’ve been impressed with what they delivered with Hyper-V out of the box. They’ve had some issues but they recognized them early and fixed ‘m fast. It has been a pleasure working with this technology for the last three years and I am now enjoying the benefits of Dynamic Memory with Windows Server 2008 SP1. All I can say that if you have a genuine interest in the technology and communicate clearly and politely with Microsoft personnel they are very engaged to help you. I’m pretty pleased

As promised a while back (Busy, busy, busy) here’s a quick heads up for all you people out there who are still running there DFS namespaces in Windows 2000 mode. Well, when your sporting Windows 2008 (R2) you should get those namespaces moved to Windows 2008 mode sooner or later anyway. For some reason, there is no GUI or PowerShell command let to do this. It’s pretty amazing how many of those of you that can change to the Windows 2008 mode didn’t do it yet. Perhaps the somewhat involved manual process has something to do with this? But OK, if you still see this when you look at the properties of your DFS namespace … 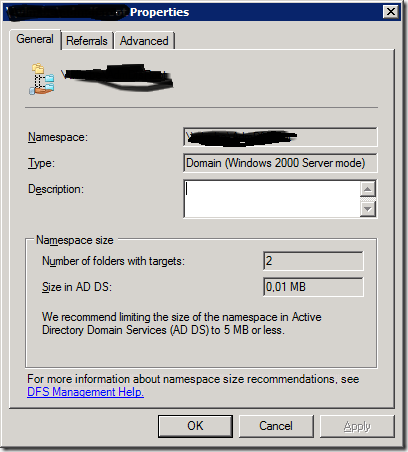 … then perhaps it’s time to go visit TechNet you’ll find some info to do it semi-automated as they call it: Migrate a Domain-based Namespace to Windows Server 2008 Mode

Here’s a recap of the steps to take:

Be sure to read the community comments as the ampersand issue might affect you. As always it’s good to do some research on possible updates affecting the technology at hand so that’s what I did. And look here what “Binging” for “DFS windows 2008 R2 updates” produced: List of currently available hotfixes for Distributed File System (DFS) technologies in Windows Server 2008 and in Windows Server 2008 R2. We might as well put them into action and be on the safe side.

If you’re not using DFS-N or DFS-R yet give it a look. No, it’s not the perfect solution for every scenario, but for namespace, abstraction (server replacements, moving data, server renaming, …) and keeping data available during maintenance or at the right place (branch offices for example) it’s a nice tool to have.  As another example,  I just recently used DFS-R in full mesh to synch the nodes in an NLB FTP solution where about 45 devices put data on the FTP servers (Windows 2008 R2) via the VIP so they have resilient FTP service.