We have been running CommVault Simpana 9.0 R2 SP7 in combination with the DELL Compellent Hardware VSS provider to do host based backups of the virtual machines on our Windows Server 2012 Hyper-V clusters host with great success and speed.

We’ve run into two issues so far. One, I blogged about in DELL Compellent Hardware VSS Provider & Commvault on Windows Server 2012 Hyper-V nodes – Volume Shadow Copy Service error: Unexpected error querying for the IVssWriterCallback interface. hr = 0×80070005, Access is denied was an due to some missing permissions for the domain account we configured the Compellent Replay manager Service to run with. The solution for that issue can be found in that same blog post.

The other one was that sometimes during the backup of a Hyper-V host we got an error from CommVault that put the job in a “pending” status, kept trying and failing. The error is:

When we look at the Compellent controller we see the following things happen:

The result at the CommVault end is that the job goes into a pending state with the above error. When we look at the state of the Microsoft Hyper-V VSS Writer by running “vssadmin list writer” …

… from an elevated command prompt we see:

Note at this stage:

To get rid of this one we can restart the host or, less drastic, restart the Hyper-V Virtual Machine management Service (VMMS.exe) which will do the trick as well.  Before you do this , drain the node when you pause it, then resume it with the option failing back the roles. Windows 2012 makes it a breeze to do this without service interruption 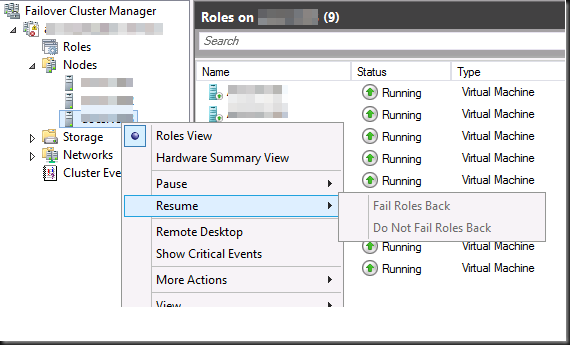 The Cause: Almost or completely full partitions inside the virtual machines

Looking for solutions when CommVault is involved can be tedious as their consultancy driven sales model isn’t focused on making information widely available. Trouble shooting VSS issues can also be considered a form of black art at times. Since this is Windows 2012 RTM an the date is September 20th 2012 as the moment of writing, there are not yet any hotfixes related to host level backups of Virtual machines and such. CommVault Simpana 9.0 R2 SP7 is also fully patched.

This,combined with the fact that we did not see anything like this during testing (and we did a fair amount) makes us look at the guests. That’s the big difference on a large production cluster. All those unique guests with their own history. We also know from the past years with VSS snapshots in Windows 2008(R2) that these tend to fail due to issues in the guests. Take a peak at Troubleshoot VSS issues that occur with Windows Server Backup (WBADMIN) in Windows Server 2008 and Windows Server 2008 R2 just for starters  As an example we already had seen one guest (dev/test server) that had 5 user logged in doing all kinds of reconfigurations and installs go into save mode during a backup, so it could be due to something rotten in certain guests. There is very much to consider when doing these kinds of backups.

By doing some comparing of successful & failed backups it really looks as if it was related to certain virtual machines. A lot of issues are caused by the VSS service, not running or not being able to do snapshots because of lack of space so perhaps this was the case here as well?

We poked around a bit. First let’s see what we can find in the Hyper-V specific logs like the Microsoft-Windows-Hyper-V-VMMS-Admin event log. Ah lot’s of errors relating to a number of guests! 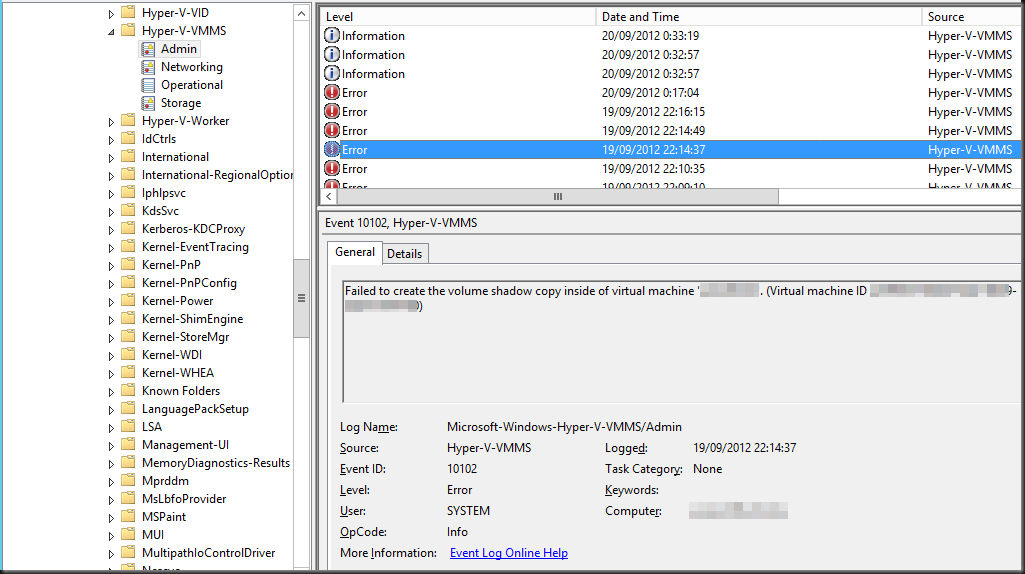 Well people, that is called a clue

. So we did some Live Migration to isolate suspect VMs to a single node, run backups, see them fail, do the the same with a new and clean VM an it all works. and indeed … looking at the guest involved when the CommVault backup fails we that the VSS service is running and healthy but we do see all kind of badness related to disk space:

That later one left 0MB of disk space on the system (Test Controller TFS shitting itself), but we managed to clear just enough to get to just over 1GB of free space which was enough to make the backup succeed. 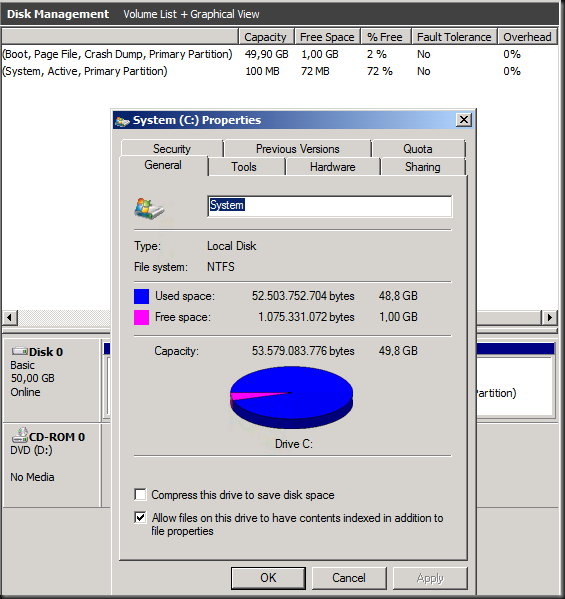 Servers, virtual or physical ones, should to be locked down to prevent such abuse. I know, I know. Did I already tell you I do not reside in a perfect world? We cannot protect against dev and test server admins who act without much care on their servers. We’ll just keep hammering at it to raise their awareness I guess. For end users and production servers we monitor those well enough to proactively avoid issues. With dev & test servers we don’t do so, or the response team would have a day’s work reacting to all alerts that daily dev & test usage on those servers generate.

Microsoft Hyper-V VSS Writer  to a healthy state as described above. Thanks to Live Migration this can be achieved without any down time.

There is experimenting, testing, production testing, production and finally real life environments where not all is done as it should be. Yes, really the world isn’t perfect. Managers sometimes think it’s click, click, Next, click and voila we’ve got a complex multisite system running. Well it isn’t like that and you need some time and skills to make it all work. Yes even in todays “cheap, fast, easy to run your business form your smartphone”  ecosystem of the private, hybrid and public cloud, where all is bliss and world peace reigns.

The DELL Compellent Hardware VSS provider & replay manager service handle all this without missing a beat, which is very comforting. As previous experiences with hardware VSS provides of other vendors make us think that these would probably have blown up by now.