Veeam will be holding its annual conference VeeamOn 2017 in New Orleans, Louisiana on May 16th – 18th. You can actually already pre-register for the conference today. Just follow this link. This qualifies you for a 200$ discount. 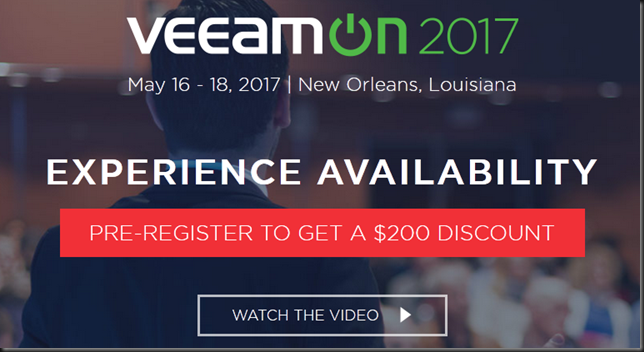 But don’t stop there. When you work with Veeam products you might have some interesting solutions and experiences to share. Maybe you got creative and designed a smart solution to you needs. That’s something that can inspire people to think about how they use the products. So please, don’t be shy. Consider submitting your proposal for a presentation at VeeamOn 2017. Help your peers to achieve their needed availability in an always-on world. Go to https://www.veeam.com/veeamon/call-for-presentations and share your experience, knowledge and insights.

I hope to see you there to learn form and be inspired by you, my peers and colleagues from all over the world!

As you might well know I’m attending TechEd North America right now. I blogged about that. But I have to correct this a bit. Today I will also be presenting together with Ben Armstrong and help him deliver session DCIM-B380 What’s New in Windows Server 2012 R2 Hyper-V.

Ben Armstrong, Principal Program Manager on the Hyper-V team, will be showing you the wealth of features that provide capability, scalability, performance, availability and reliability in Windows 2012 R2 Hyper-V that make it THE capable and scalable cloud OS.

I’m honored to be able to show case a few of the technologies in Windows 2012 R2 we are leveraging in production today. So can you, really!

Here’s a little roadmap of conferences on my radar screen for 2014. Some I can’t attend because of conflicts in my schedule and other priorities, but I list ‘m here for your consideration.

If you’re working with Dell technologies, either hardware or software this is for you. It very interactive and you get provide feedback to the product teams as well as briefings on what coming. Some are under NDA, some not.

I’m attending, everything has been arranged. So if you’re a blog reader/twitter follower give us a ping.

This is a non marketing event by experts in virtualization. So these people design, implement and support virtualization solutions for a living.  E2EVC Virtualization Conference is a non-commercial, it does not run a profit for the organizers or speakers. Everybody volunteers. The attendance fee covers the costs of the conference rooms, coffee breaks and such. The value is in the knowledge sharing and the networking.

I love watching the OSCON presentations on line and it’s one of my never attended that on my must attend list. Whether that will happen this year remains to be seen.

It runs from October 27th to October 31st 2014 in Barcelona. I hope to meet you there and I hope they are ready at that time to talk about vNext

. It’s a great opportunity to network and talk shop with so many of my peers I’ll most definitely try to be there. Any vNext information would most certainly make it a not to miss event. They announced it a bit late and they already have lost some of the potential attendees to TechEd North America. Not their best move ever I must say.

Details have yet to be announced. But if my schedule allows I will attend and present!

No details as of yet but for partners & customers this is a valuable opportunity to talk to the product teams, directors, marketing mangers and engage in some serious conversation about technology and where DELL fits in your road map.

I will NOT miss the MVP Summit