While working on an Active Directory upgrade, a couple of backup repository replacements, a cluster hardware upgrade, a few hybrid cloud projects as well as a couple of all flash array migrations we get word about what we already suspected due to the massive maintenance announced in December in AWS and Azure around our IAAS. Spectre and Meltdown are upon us. I actually did all the maintenance proactively in Azure. So naturally I wondered about the hardware we own, clients, servers, load balancers, storage etc. All driven by CPUs. Darn that will wake you up in the morning. Now to put the doom and gloom in perspective you can read Meltdown and Spectre exploits: Cutting through the FUDand-spectre-exploits-cutting-through-the-fud.html which will help you breathe normally again if you were panicking before.

Getting to work on the problem

Whilst prepping our plan of action for deploying the patches, checking anti-virus compatibility, firmware and BIOS updates I do notice that the CISO / DPO are missing in action. They must have learned we are normally on top of such things and have gotten better at not going along with too much FUD. Bar all the FUD and the incredible number or roadside scholars in CPU design that appear on line to discuss CPU designs we’ve worked out a plan.

The info out there is a bit messy and distributed. But I have a clear picture now on what to do. I’m not going to rehash all the information out there but here are a couple of things I noticed that can cause issues or be confusing.

Microsoft mentioned the patch would not be installed on systems that don’t have the registry key set to indicate there is no compatibility issue with the anti-virus software (Important information regarding the Windows security updates released on January 3, 2018 and anti-virus software)

Note: Customers will not receive these security updates and will not be protected from security vulnerabilities unless their anti-virus software vendor sets the following registry key:

This seems not to be working that well. We saw the CU being downloaded and installs attempted on systems with Antivirus that did not have the registry key set. Shouldn’t happen right? We killed the update service to prevent the install, but luckily it seems our anti-virus solution is compatible( (see https://kc.mcafee.com/corporate/index?page=content&id=KB90167 – we have McAfee Enterprise 8.8 patch 10). Now the above article only mentions this registry setting for AV on Windows 2012 R2 / windows 8.1 or lower but the OS specific patches also mention this for Windows Server 2016 / Windows 10. See https://support.microsoft.com/en-us/help/4056890 (Windows Server 2016) for an example. Right …  One of my MVP colleagues also had to add this registry edit manually (or scripted) and need to download the latest Defender definitions for the update to be offered to him. So it seems not just 3rd party anti-virus. Your mileage may very a bit here it seems.

There is a great community effort on anti-virus compatibility info here https://docs.google.com/spreadsheets/d/184wcDt9I9TUNFFbsAVLpzAtckQxYiuirADzf3cL42FQ/htmlview?sle=true#gid=0

Anyway after a reboot you’ll see that the mitigations are active via a PowerShell module you can download.

Installing the patches is enough. You only need the extra keys mentioned in article Windows Server guidance to protect against speculative execution side-channel vulnerabilities on Windows 10 if you want to toggle between enabling them or disabling them. You do need to set them for Windows Server! These registry setting changes require a reboot to become effective.

#To disable the mitigations

After a reboot you can see the mitigations are disabled. That allows you to work around issues these might incur. It’s better than uninstalling the update.

#To enable the mitigations. Note that the FeatureSettingsOverrideMask value does remain 3, it’s not changed just left in place. 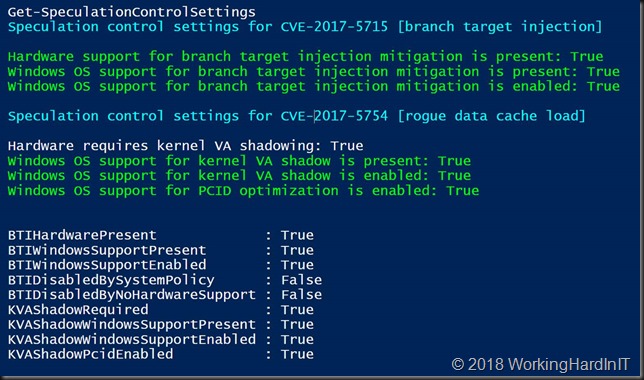 Do find the BIOS/Firmware updates you need from your OEMs and install them as well.If you don’t the output won’t be a nice and green as the above. I’m running tis on a DELL XPS 13 and that BIOS was patched a few days ago. Dell has been prepping for this before we ever knew about Spectre and Meltdown. Here’s an example: http://www.dell.com/support/home/be/nl/bedhs1/drivers/driversdetails?driverId=MXXTN

When waiting for the BIOS update or while you are testing the impact there is an other way to help protect your Hyper-V host while you’re at it to help mitigate VM to VM or VM to host attack: Alternative protections for Windows Server 2016 Hyper-V Hosts against the speculative execution side-channel vulnerabilities

Here is more guidance by Microsoft for both Hyper-V hosts, virtual machines and SQL Server installations.

This is not the end

This is not the end of the world, but it’s also not the end of the issue. CERT was very clear, probably due to Spectre, that the real fix was to replace the CPUs. So the heat is on and this might very well lead to an accelerated replacement of systems at the bigger cloud players and large hosters. They cant afford to lose 20 to 30 % of CPU performance. I have no insight on the impact they’re seeing, they might shared that in the future, but it could ruin their economies of scale. There’s always money to be made from a crisis right. But I have seen anything between 0 to marginal and 5-20% loss in testing, the latter with SQL workloads. It all depends on what the workloads is asking the CPU to do I guess and if that leverages speculative execution. It’s not going to that bad for most people. But for the cloud players who really max out their systems this might have a bigger impact and their risk profile (mutli-tenant, shared resources) + the potential rewards for hacking them makes it a  big concern and top priority for them. But we have done our homework and can mitigate the issue.

Replacing consumer devices and in all the IoT, sensors, domotics, cars, etc. out there is another matter. I’d be happy to see them all get patched in a reasonable time, which is also a pipe dream and that isn’t likely judging from the current state of things. Security is going to get a whole lot worse before it gets any better

And finally, hats of to the Google engineers who found the issues. Technically it’s quite fascinating even when explained at my level (I am not a CPU designer, so I need the Barney Bear version).