1. You evict the nodes, one after the other, perform a clean OS install and join them to the existing cluster.

2. You do an in-place OS upgrade of the nodes (no need to evict the nodes, you can if you want to). I tested this and blogged about it in In Place upgrades of cluster nodes to Windows Server 2016

As you can see the cluster functional level is 8 and not 9 yet. This means that we have not yet run the Update-ClusterFunctionalLevel command on this cluster yet. Which still allows us to roll back all the way to a cluster running only Windows 2012 R2 nodes. The ClusterUpgradeVersion has a value of 3.

We now execute the Update-ClusterFunctionalLevel command and take a look at Get-Cluster again. 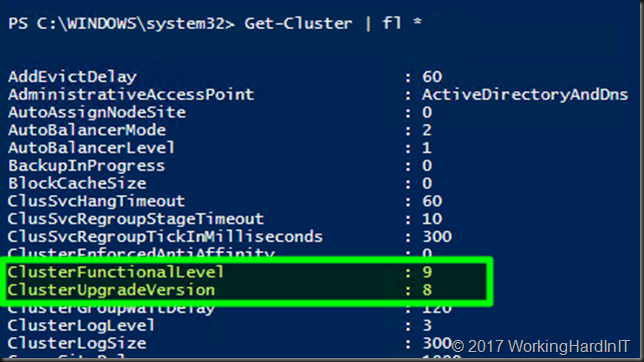 What about if you create a brand-new cluster, perhaps even on freshly installed windows Server 2016 Nodes? What does ClusterUpgradeVersion have as a value then? Well it’s also 8. In the end, there is no difference between an in-place upgrade Windows Server 2016 cluster and a cleanly created one. So where are those traces?

What gives a rolling upgrade away is that in the registry, under the HKLM\Cluster the OS and OSVersion values are not updated (purple in the picture below). This is a benign artifact and I don’t know if this if on purpose or not.  I have changed them to Windows Server 2016 Datacenter as an experiment and I have not found any issues by doing so. Now, please don’t take this as recommendation to do so. The smartest and safest thing is to leave it alone. These are not used, so don’t worry about them. 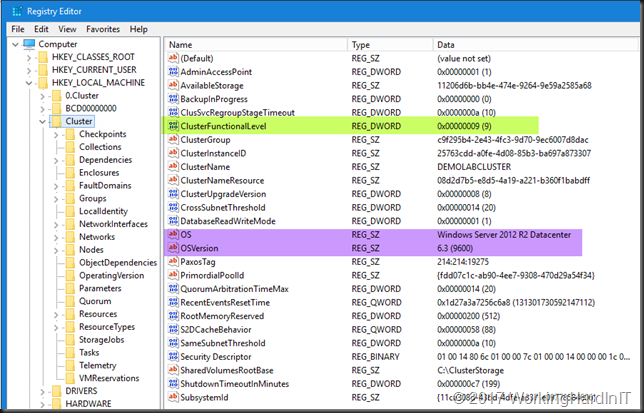 But even if you would change those values a cluster resulting from of a cluster operating system rolling upgrade still has other ways of telling it was not born as a Window Server 2016 Cluster.

Under HKLM\Cluster (and Cluster.0) you’ll find the value CusterFunctionaLevel that does not exist on a cleanly installed Windows Server 2016 Cluster (green in the picture above). As you can see this is a Window Server 2016 cluster running at functional level 9.

There is even an extra key OperatingVersion under HKLM\Cluster that you will not find on a cleanly installed cluster either. It also has a Mixed Mode value under that key which indicates whether the cluster is still running in mixed mode or not.

Here is a screenshot of newly installed/created Windows Server 2016 cluster. No ClusterFunctionalLevel value, the OS and OSVersion Values are correct and there is no OperatingVersion key to be found. 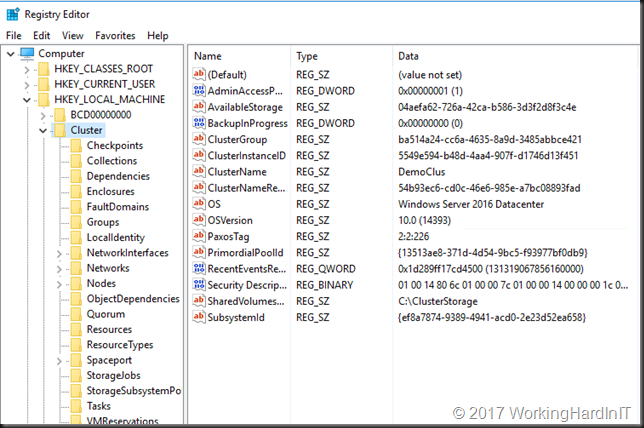 First of all, these traces are harmless. One thing you can do if you want to weed out all traces of a rolling upgrade (as far as the cluster is concerned) is to destroy the cluster and create one with the same CNO (and IP address if that was a fixed one). This might all be a bit more involved when it comes to CSV naming and other existing resources but then these remnants will be gone in a supported way. Now this does defeat one of the main purposes of this feature: no down time. The operating system itself might also contain traces if you did in-place OS upgrades but the cluster will not. Just adapting OS/OSVersion, ClusterFunctionalLevel and deleting the key OperatingVersion from HKLM\Cluster (and HKLM\Cluster.0) are not supported actions and messing around in the cluster registry keys can lead to problems, so don’t! The advice is to just leave it all alone. Microsoft developed cluster operating system rolling upgrade the way they did for a reason and by leaving things as Microsoft has set or left them will make sure you are always in a fully supported condition. So, use it if it fits the circumstances & you comply with all the prerequisites. Look at these traces a flag of honor, not a smudge on your shining armor. When I see these artifacts, I see people who have used this feature to their own benefits. Well done I say.

Next to my blogs like First experiences with a rolling cluster upgrade of a lab Hyper-V Cluster (Technical Preview) and In Place upgrades of cluster nodes to Windows Server 2016 there are many resources out there by fellow blogger and Microsoft. A great video on the subject is Introducing Cluster OS Rolling Upgrades in Windows Server 2016 with Rob Hindman, who actually works on this feature and knows it inside out.

An important thing to keep in mind is that this can be automated using PowerShell or by leveraging SCVMM for orchestration for example. 3rd party tools could also support this and help you automate this process in order to scale it when needed.