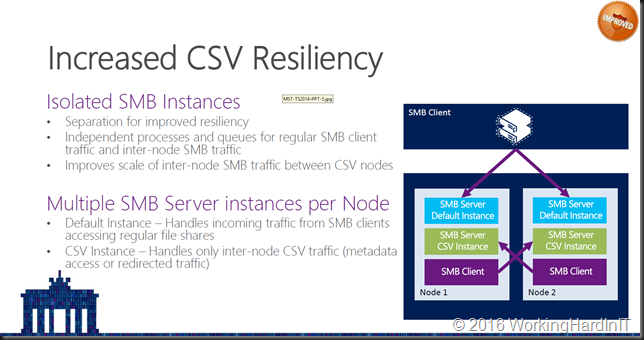 You can also read more on TechNet here.

We have New SMB Instances in Windows Server 2016

I’m happy to see this concept being expanded in the new SMB workloads. When playing  with Windows Server 2016 TPv5 I you’ll notice that we now have gotten extra SMB instances:

So what are these New SMB Instances in Windows Server 2016 about?

Default: This is what we had before, it’s nonspecific default SMB traffic, such as file shares

CSV: Also already known since Windows Server 2012 R2. This is the CSV traffic. This got isolated for better resiliency and isolation of issues. The goal was not to let CSV SMB issues affect default SMB traffic.

SR: This stands for Storage Replica. The purpose of this instance is the same as for CSV, isolate and make SMB on the whole more resilient.

“SSB uses SMB3 and SMB Direct as the transport for communication between the servers in the cluster. SSB uses a separate named instance of SMB in each server, which separates it from other consumers of SMB, such as CSVFS, to provide additional resiliency. Using SMB3 enables SSB to take advantage of the innovation we have done in SMB3, including SMB Multichannel and SMB Direct. SMB Multichannel can aggregate bandwidth across multiple network interfaces for higher throughput and provide resiliency to a failed network interface. SMB Direct enables use of RDMA enabled network adapters, including iWARP and RoCE, which can dramatically lower the CPU overhead of doing IO over the network and reduce the latency to disk devices”

Funny anecdote: while doing some research I stumbled upon the MSDN article MSFT_SmbShare class. As you can see in the screenshot below the name was mistakenly put at “Storage Bus Later” but it should be Storage Bus Layer or as it’s now called the Software Storage Bus:

Now that will be fixed soon or by the time you read this blog post. All fun aside, if you want to see what that Software Storage Bus is capable of look at this blog post and video by Ned Pyle on what Claus Joergenson achieved already in 2015 with this technology. Amazing results!