A remarkably little known feature in Windows Sever 2012 R2 (and Windows 8.1)  is the ability to export one or multiple running virtual machines. 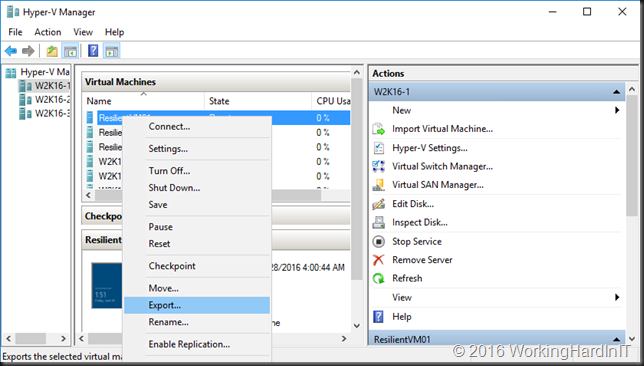 You just select right click in the Hyper-V manager and select Export from the context menu and follow the wizard to select an export location. Easy. This is also possible via PowerShell so you can automate this. The result is a VM you can import which gives you a copy of the original virtual machine in a saved state, at the point in time that you exported it. 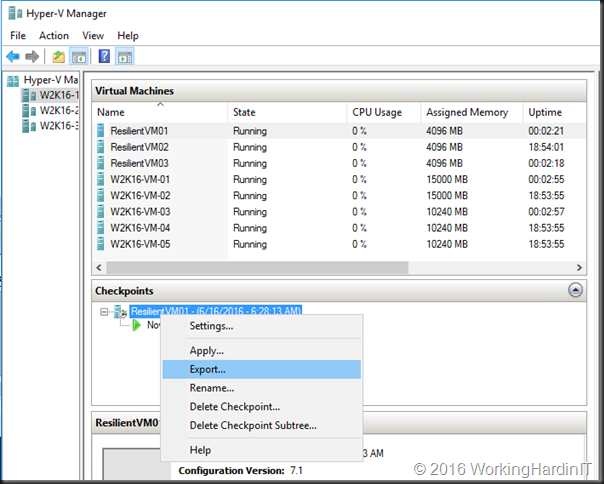 So why even have the option of exporting a checkpoint of a running VM? Because this enables you to have exports from various points in time, which is pretty cool and handy during test and development and trouble shooting or lab work. As a standard checkpoint has state in Windows Server 2012 R2 I prefer to shut down the VM, create a checkpoint and start the VM again. When I then export that checkpoint I don’t have to worry about the state in the VM at that point in time as it was shut down.

For some workloads this isn’t a big deal bit for some this is not a great experience, hence the fact that checkpoints are “”not supported in production but for test and dev.

In Windows Server 2016 we now have production checkpoints. That means that when we apply such checkpoints we have a consistent state just like when we restore VM from a backup. You’ll have to boot it up after applying the checkpoint, they do not appear running with the state at the time the snapshot was taken. Well, not unless you opt to create standard checkpoints. The reduces the need for me to shut down a VM before I create a checkpoint to export in many cases.