There have been some recent changes in my technology community life. As an MVP I have been assigned to the Cloud and Datacenter Management award category. This reflects the fact that we all touch on a lot more technologies than the expertise we have received or award for. In my case Hyper-V means I also do networking, storage,  high to continuous availability (clustering, network load balancing), data protection, IAAS as well as Identity Management (authentication/authorization) both on premises and on Azure.

In that spirit we attended the MVP Summit 2015, which was a great experience and confirmed what Scott Guthrie stated above, we are “most valuable professionals”.

Another award is decorating my home office. It’s the inaugural member edition of the Veeam Vanguard Award we received at VEEAMON 2015 in Las Vegas that we attended. 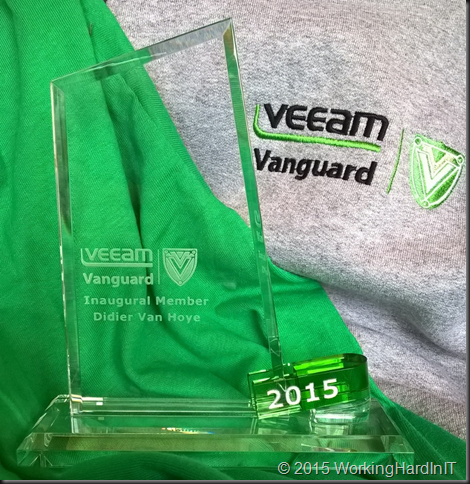 That conference was a blast by the way. Breakout sessions, white boarding sessions, presenting on Hyper-V related technologies and lots of networking with smart and engaged technologists. We also sat down with some CEOs of  2 companies and helped them determine an upgrade path for their hyper-V environments for the next 12 to 18 months. We  even some real world troubleshooting in one of the attendees environment. I’d like to think we delivered value for all involved and we got to learn a lot ourselves.

I liked what they shared about Veeam Backup & Replication v9 that’s in development. And their announcement for Veeam Backup for Linux was well received. You can preregister for that here

2 thoughts on “Recent Changes In My Technology Community Life”