LATEST UPDATE March 9th 2011: I have installed Exchange 2010 SP1 Rollup 3 at customer and this did indeed fix this issue finally.

Updates to this post are being added as we get them below. Last update was October 13th 2010. The have identified the cause of the issue. It’s a case sensitivity bug. The fix is WILL be contained in Exchange 2010 Sp1 Roll Up 3? But they ARE working on a incremental update in between. See below for more details and the link to the Microsoft blog entry.

At a customer we have a 3 node geographically dispersed DAG. This DAG has two nodes in the main data center and one in the recovery site in another city, but it is in the same AD Site. This works but is not ideal as DAC in Exchange 2010 RTM presumes that the node will be in another Active Directory site. As you can imagine at that location we’re very interested in Exchange 2010 SP1 since that adds support for the DAC to be used with a geographically dispersed DAG node in the same Active Directory site.

We did an upgrade to SP1 following the guidelines as published in http://technet.microsoft.com/en-us/library/bb629560.aspx and we made sure all prerequisites where satisfied. We upgraded the backup software to a version that supported Exchange 2010 SP1 and made sure no services that hold a lock on Exchange resources are running. The entire process went extremely well actually. We did have to reconfigure redirection for OWA as the SP1 installation resets the settings on the Default Web Site on the CAS Servers. But apart from that we had no major issues apart from one very annoying GUI problem. Everything was fully functional, which we verified using EMS and by testing failovers. But in the EMC GUI we had the problem under Organization / Mailbox / Database Management we only see the database copies listed on one server and not on all tree. 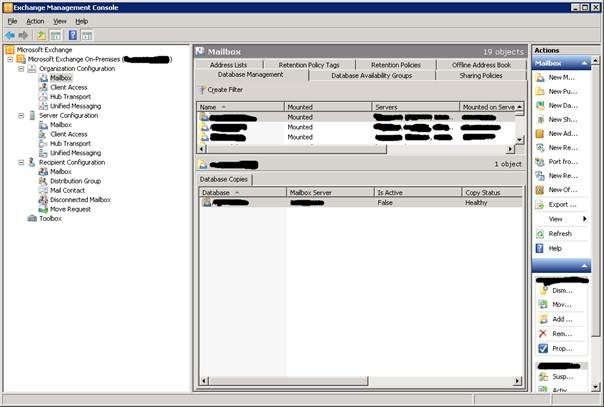 When you check the properties of the databases shows all three servers that are hosting copies. We used EMS commands to test for problems but it all checks out and works. Failing over a server works, both in the GUI and in PowerShell, just like activating a database.

The same issue can be seen in Server Configuration /Database Copies as demonstrated in the screenshots below. In the first figure you we selected the mailbox server where the database copies are visible. 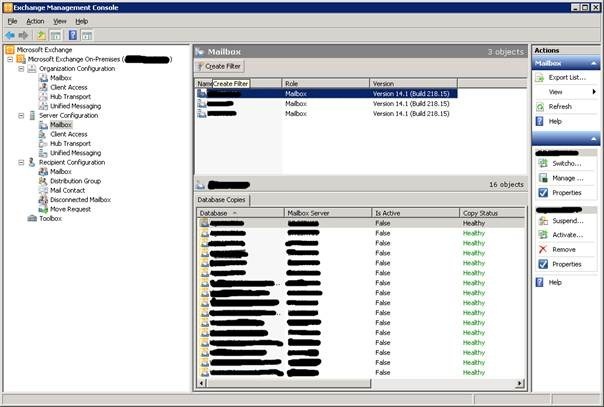 But on the other two nodes nothing shows up, just “There are no items to show in this view”. 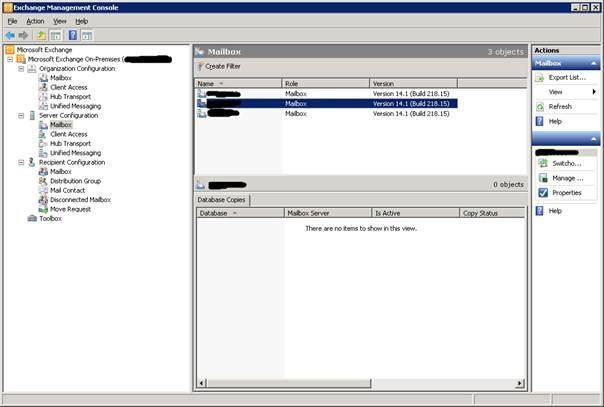 No errors in the vent logs or installation logs. All is working fine. So what gives? We tried all the usual suspects like throwing away any user related MMC cache information and cleaning out the Exchange specific information in the user profile up to deleting the profile etc. But nothing worked.

Running the script below, which is given to you by Microsoft to check your DAG before upgrading to SP1, confirms all is well.

Searching the internet we find some folks who have the same problem. Also with a 3 node DAG that is geographically distributed. Is this a coincidence or is this related? http://social.technet.microsoft.com/Forums/en-US/exchange2010/thread/37d96c3d-433e-4447-b696-c0c00e257765/#5071f470-13cb-4256-8aa7-ade05bb4d67d. At first I taught it might have been related to the issue described in the following blog post http://blogs.technet.com/b/timmcmic/archive/2010/08/29/exchange-2010-sp1-error-when-adding-or-removing-a-mailbox-database-copy.aspx but in the lab we could not reproduce this. The only thing we managed to confirm is that you can delete the Dumpsterinfo registry key without any problem or nasty side effects. I’m still looking into this, but I’ll need to get Microsoft involved on this one.

We requested feedback today and tonight we got an e-mail with a link to a blog post confirming the issue and the cause. When the Exchange Management Console draws the database copies pane, it compares the host server name of a database copy to the server name of a database copy status.  This comparison is case sensitive and if they do not match up like in DAG-SERVER-1 <> Dag-Server-1 the database copies are not shown in the GUI. Again in EMS all works just fine. A fix is still in the make. You can find the Microsoft bug here: http://blogs.technet.com/b/timmcmic/archive/2010/10/04/database-copies-fail-to-display-after-upgrading-to-exchange-2010-service-pack-1.aspx

I received another mail from Microsoft support just now. They expect this issue to be fully resolved in Exchange 2010 Service Pack 1 Rollup Update 3.  At this time they also intend to release an incremental update that corrects the issue. But this has some caveats.

1)  The incremental update would have to be applied to all servers where administrators would be utilizing the Exchange Management Console.  I think this is expected, like with most updates.

The workaround for customers not desiring to install an incremental update would be to continue using the Exchange Management Shell with the Get-MailboxDatabaseCopyStatus command. Nothing new here

They have also updated their blog: http://blogs.technet.com/b/timmcmic/archive/2010/10/04/database-copies-fail-to-display-after-upgrading-to-exchange-2010-service-pack-1.aspx

I’m planning on keeping the case open in order to get my hands on the fix to test in the lab and have it for customers who so desire.

The fix WILL be included in Exchange 2010 SP1 Roll Up 3. They ARE working on the interim updates but this will take several weeks or longer.